Women who run with bitches but cant keep up

My life before marriage and mumanonymity... (try and say that fast three times)

‘Meow’ that’s the official mating call of the Trouser Hounds or more appropriately still; Wallet Hounds. I have borne witness to some pretty classy competitions when it came to looking for ‘Mr-Good-Porche’. Actually in London, it’s more a case of Mr-Yellow-Ferrari-Black-Amex.

It’s tough going for a nice grounded Aussie girl to be alone in a bad old city like London, with its enormous populace of early release mental patients.

I started out to my own detriment with a puppy personality, wagging my tail in a frenzy of indiscriminate befriending. As a result of which for the first six months, till I learned to snap and growl, I was stalked by a succession of scary bunny boilers and partying with piranhas in Prada, the sort of women who would eat their own young.

In the quest for a decent bloke, there were times I was literally trampled in the stampede towards some poor chap, with all due diligence on his income and assets having been completed by the surrounding team of social Pit Bulls.

It’s tricky making real friends in this environment, more like being absorbed into a hunting pack where friendship has little or nothing to do with it. Talk about your ‘Cinderella Complex’, this is the C.C. World Championship, and you’d better be wearing Kevlar if there aren’t enough princes to go around.

You could literally be torn to pieces over an unfashionable choice of accessories and by unfashionable, I mean carrying or wearing something so ten minutes ago.

Preparation for hunting parties is both astounding and educational. Linda regularly used a lip pump for that natural (pul-eese!)trout-lip effect. Standing in the bathroom with a contraption, reminiscent one of those rubber drain plungers you'd buy in hardware store, over her face pumping away like her life depended on it. A wonder she could kiss after that without drawing blood or accidentally sucking her date right out of his chair – that would leave a nasty hickey, huh? But Linda was a seasoned ‘wallet sniffer’ from LA.

LA in my opinion smacks of the sort of city you would expect to give birth to such devices as ‘lip pumps’ and other curious, suggestive objects that “..conveniently plug into your car cigarette lighter”.

Although not immediately apparent, I was the oldest of the pack. But Deanne, our youngest and most competitive, whose petite frame and pretty face belied her Wiltshire-Stay-Sharp tongue and a ruthlessness that would scare al Qaeda, was constantly nipping at my heels trying to heard me toward the geriatrics.

If I uttered more than two words to a man, she would demand “have you told him how old you are?”. Similar situation to a convicted paedophile considering a career move into teaching kindergarten, in her opinion, I should have some kind of legislated requirement of immediate disclosure.

Deanne was a relationship saboteur of supreme proportions, with a penchant for married men on fat salaries. She was such a cat too; every dinner, one of us inevitably asked the nearest passing waiter to bring her a saucer of milk.


Then there was Scary Flatmate, as caustic as a bottle of Domestos, who could clear a dinner table faster than a fire alarm. Despite being thin and pretty with long blonde hair, all she had to do was open her mouth to turn any man ‘off’ as effectively as a king size box of Tampax. She was a consummate conversation Nazi, but with the inexplicable idea that everyone enjoyed her company enormously.

Miriam was a ‘professional girlfriend’. Draped in all things designer with a jewellery collection that could finance the national debt, she impressed everyone, managing to con some sucker into paying for several 20 grand a pop recording sessions in Abbey Road Studios, in spite of the well known fact she sang like a scalded cat.


Barely housetrained, lavishly lazy and with a 30-second attention span, she also never bothered to turn up to record her “hit CD”.

Another of her brainwaves almost took her to the bottom of the Thames wearing cement stilettos, when she decided it would be a fantastic idea to fall pregnant to a wealthy ex, so he would have to marry her and/or, keep her in luxury for the rest of her days.

But excessive as Miriam was, she decided, to hedge her bets and play a couple of ex’s at one time.

So things got a little ugly, when her ‘heavy’, whom she’d successfully engaged with floods of tears and pouting to put the squeeze on one prospective father, found out the baby could have any of several fathers. Heavy dude was seriously and perilously unimpressed, requiring a much larger flood of tears and truly excessive pouting. If ‘crying and pouting’ ever becomes an Olympic sport, Miriam will do her country proud and have yet more gold laying about on the night stand.

Notwithstanding the fact I had neither the purse for Prada, nor a killer competitive instinct, I found myself being energetically courted by a millionaire widower and forced to shop for bigger vases to accommodate the multiple dozens of long stemmed roses, regularly delivered in lovely green Harrods vans.

This clever man knew his target market: he also sent shoes! The lovely green van also brought me some leather ankle boots with chrome stiletto heels and Agent Provocateur fuscia, fur trimmed, satin mules, both of which really deserved to be in a display case at the Tate Modern.

They were so beautiful and unusual (and a perfect fit), which now strikes me as slightly disturbing. But alas it was a case of Crystalle goggles with pink tinted bubbly lenses. Eventually I sobered up and that relationship, along with my membership to the Trouser Hound Sorority, ended before it really got started.
at 8:15 AM No comments:

Invasion of the body snatchers 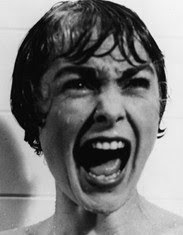 I hate being a woman.

Wonder if I could sell my girlie bits on EBAY: For Sale - fully functional reproductive system hardly used, with corresponding hormones (will not sell separately) - Best offer

I hate being a woman - Yesterday I said I loved it but that’s just the problem with random hormones, you can’t make up your mind because it’s lost or taking a holiday somewhere. Besides yesterday I was wearing a miniskirt and everyone was nice to me; unless you have a Pammy Anderson cup size, jeans make you invisible.

I hate this. You start out having a great day feeling normal, energetic, optimistic even and suddenly you’re Linda Blair with your head spinning round full circles, and some hidden ventriloquist is using you mouth to speak with.

I have an entirely new set of values, opinions, temperament and a whole new personality, to what I had yesterday - this morning even. Do they still do exorcisms? It could be a good idea to get start before the green vomit.


I have matching pimples on each cheek and one coming up on my eyebrow. What sort of a place is that to get a pimple for goodness sake, whoever heard of acne infested brows? It gets better than that; yesterday I was size 10 and today I’m a 16 (Hurrah I've turned into a human form of Luna Park's fat mirrors, what fun).

My stomach and my thighs are like balloons filled with water all squelchy and wobbly and my fingers are like breakfast sausages. I can’t for the life of me get my rings off and when I walk I can almost hear sloshing sounds with each step.

As an added bonus, by mid afternoon my hair will resemble wet seaweed; all this and a bad hair day too - there is no God.

I find myself looking for a filing cabinet around the office that’s tall enough to jump off to any effect.

After ten years my husband knows the drill: move slowly, speak softly and don't approach The Beast. He's like a seasoned lion tamer with a chair in one hand and flowers in the other.

He knows too well, that any sudden moves and this new tenant inhabiting my body,could pick a huge row with him over something frighteningly crucial like: possession of the TV remote, failure to notice a minor change in hairstyle, or failure to read my mind - what’s left of it. Then the aforementioned invading-body-snatcher-type-entity would go into a violent rage and spend the remainder of the evening feeding freshly diced pieces of husband to Mr Blender.

After a decade of survival though, he's proven his expertise as an emotionally erratic wife wrangler, and there’ll be one more man alive tomorrow to enjoy his day on the planet.

Seriously, there’s not been a fun park built yet with a roller coaster ride as scary as my PMS. To get up in the morning, a confident, happy, and reasonably slim person, and miraculously transform into a snivelling, neurotic, bloated, bag of nerves, with face like a pizza and about as stable as the San Andreas Fault.

And don’t even speak to me about natural flaming therapy, Evening Primrose or Star Flower bleeding oil.

I've taken so much of that rubbish, when I pee I leave an oil slick that could devastate the North Atlantic coastline. I'm expecting Greenpeace to show up in my bathroom at any moment.

I want to go to a doctor who says something worthwhile on this like; “go home, consume a small crate of chocolate, and call me in the morning if you’re feeling no better”.
at 7:32 AM No comments: