Holiday Hair Goes Retro... where we ask the big question: "Who hasn't had a shag, baby?"

How do you know when your hormone therapy is working? An increasing obsession with Shags? 'Fraid not. More likely you'll bust-out in teen-style acne.
I have Mt Vesuvius growing out of my left nostril, acne infested; decolletage …and the left side (only) of my jaw. Still trying to figure out that one.

But at least my hair looks nice.

A funny thing happened after my last trip to the hairdresser... I decided I needed a change, after never letting my hair down- both literally and figuratively, for months.
I took in this picture: 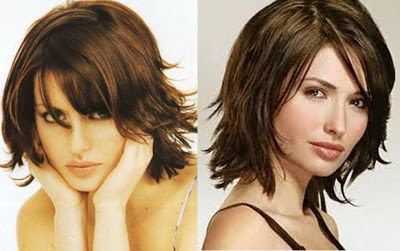 And I came out of the salon with my hair at least, looking exactly like that.

Then I slept on it and it looked like this: 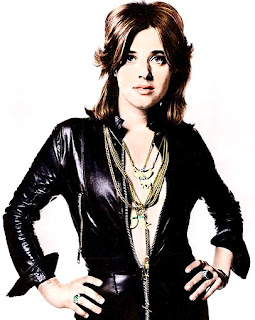 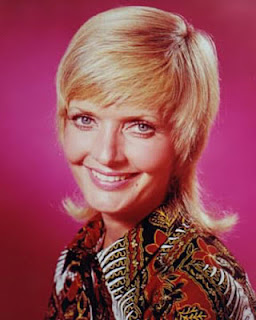 This was when it dawned on me - I had inadvertently revived the 70's Dolly-Cut.

For those of you unfamiliar with the Dolly Cut it was a female variation on the 'Mullet'.
But the Dolly-Cut was a bit subtler than the guys’ version (sometimes).  It usually had one heavy layer, level with the bottom of the ears, and either one length or subtle layering below.

Incidentally, allow me to digress for one moment because my research has uncovered
a ban in Iran on the Mullet!                 Smart move if you ask me.

But I'm serious, according to this fascinating article The Iranian Ministry of Culture and Islamic Guidance banned "un-Islamic" Western hairstyles for men especially the mullet, as recently as 2010! Begs the question; "has it seriously only just caught on over there?" Are they watching too many MacGyver re-runs or something?  Catch up people, David Beckham will show you all you need to know in the latest male hair-trends.

I bet the female version would go down like a cup of cold sick with the IMCIG, especially known by its other name. It falls under the category of, and is often referred to as a ‘Layered Shag’. As opposed to the ‘Long Shag’ which I know nothing about since I became a mother – (oh yeah, wrong kind of shag, sorry)

There is also a Short Shag (Is that like a quick shag at all?) Sorry, mind in the gutter again.
This style below is sort of a Dolly Cut/Shag hybrid: 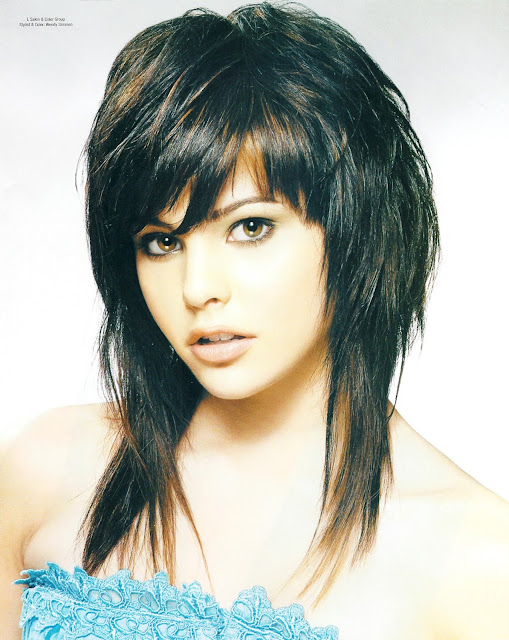 Long Shags, Short Shags, Layered Shags, seriously everyone from Posh-Becks to Helen Mirren has had a shag at some stage . 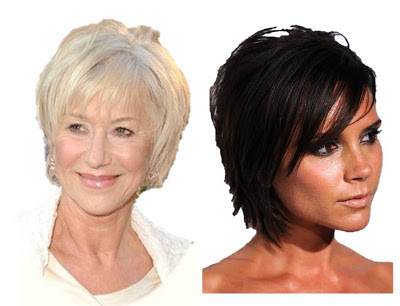 Jane Fonda is especially fond of Shags. In the 70's she started out with the real deal; Jane like Suzy Quatro was one of the most famous Dolly Cut pioneers. She didn't look too happy about it, huh? She looks a lot happier post Shag..

Mind you, if I could live in permanent soft focus these days, I'd be smiling that wide too. 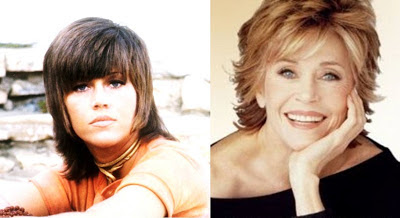 Even Florence Henderson (AKA Carol Brady) looks positively smug after her Shag: 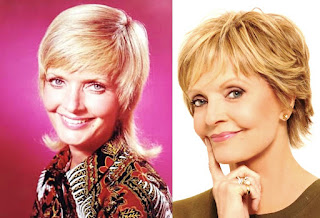 Anyway,  I now have a Dolly Cut (or shag). The same haircut I had when I was wearing my first school uniform... Ok.

I can’t complain though;after a 14hr flight wearing either  headphones,or a sleep-mask, my 'do' looked gorgeous! My face was another story of course.
Twelve washes later, my moody mop still did something a bit different each day, but now it's mostly always a good something.

Apparently this kind of style is recommended for both double and weak chins, although I notice that the models and celebs in these articles have jawlines like Buck Rogers.  My chin is as weak as a wet Kleenex, so anything that steers me in that direction is a bonus.

Now my fashion-crystal-ball is thinking that maybe cowboy jeans (please, God, NO!) and Indian moccasins are due for a comeback too. The latter I wouldn’t mind so much - they're pretty much just 'themed' suede loafers.

As far as the rest of me goes,  I just have to sort out the acne, starting with Mount Vesuvius - and of course my weight, which hasn't shifted at all. Note to self – cut out the twice weekly KFC and king-size portions of ravioli bolognaise.

But hey, at least my hair looks nice. 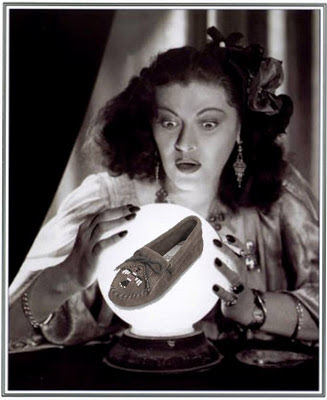 My fashion crystal ball was right, on my return from Europe, Indian moccasins started making appearances in stores all over.  Zoe Wittner does them, but oddly they have spiked studs all over them. That's fine if you want to look like a Native American punk-rocker.
Which I don't.
at 3:09 PM