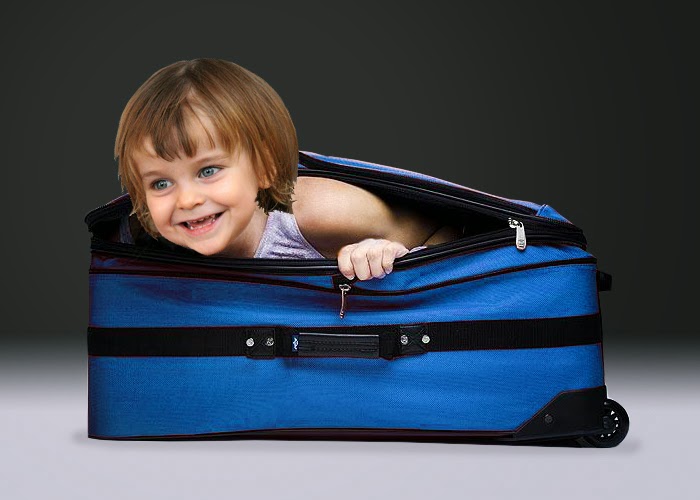 Here is a selection of our gullible travels with our little bit of excess baggage above. Click on any picture to follow the journey:


I thought I would include this B.C. one (before Child), On Cape Tribulation.

I would take Lucie to Coconut Beach resort in a heartbeat, in fact we went with friends who took their eight-month-old daughter, who was the only person in our group who enjoyed rough boat rides. :0)
All Lucie really wants is a splashy pool to float around in her sea-plane and she's quite fascinated by frogs and large lizards (resembling her beloved dinosaurs as they do). Perhaps now she's a bit older and, lets face it brave enough to climb on an elephant, I think its infinitely do-able (even the reef tour) just maybe not the croc-boat trek or the nocturnal walk which starts past bed time. 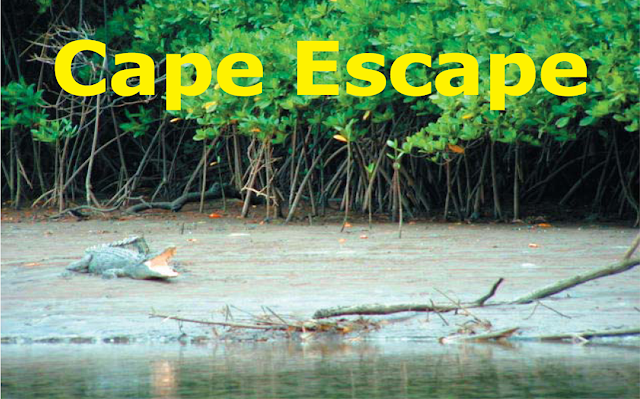 I was running through mangroves with my designer flares hitched up and flapping around my thighs like fisherman’s waders. While mentally calculating a particular croc’s line of trajectory, specifically the one that had followed our tour-boat and climbed the bank ahead, a French tourist overtook me panting something in a very lovely accent about the land speed of Crocodiles.

Wearing my sandals on my wrists to spare them the mud now oozing between my toes and sucking at my feet, my arms were flailing in some crazed Joe Cocker dance routine as I tried increase my speed and remain upright.  Looking back over my shoulder I noticed he’d left his wife way behind.  She was still climbing off the boat and helping her was my boyfriend. 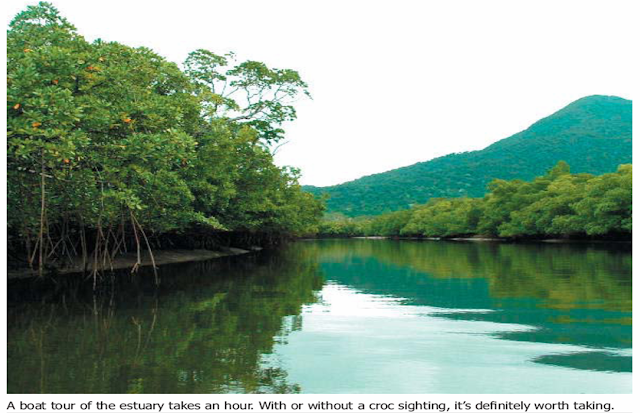 If you're not into sprinting barefoot through muddy mangroves before a croc can cut you off at the pass, or coming eyeball to eyeball with humongous goannas as you surface from a dive in the swimming pool, there is still much else to do at Cape Tribulation.

If your idea of roughing it is slow room service, then Coconut Beach Rainforest Lodge, with three mega-gorgeously landscaped, cascading pools and surrounding elevated, eco-cabins is a winner.

But be warned, even in these opulent surroundings there’s no keeping those goannas from staking out the best poolside pozzies, even if you were there first.  In fairness, these guys are local inhabitants of the 110 million-year-old rain forest you’re swimming in, so ultimately they were there first.

But would you want to debate that point with a lizard the size of a dog, sporting five centimetre claws?  Actually, the staff will tell you your greatest danger of being injured by a goanna, would be tripping over one in the adjoining Cape restaurant, where they’ve been known to get a bit rowdy chasing each other around the tables.  On one occasion, with considerable momentum, and hindered by claws on polished timber floors, a large male ended his goanna grand prix circuit of the restaurant  by skidding to an untidy and ear-splitting crash against the doors of the ladies toilet.

Impromptu goanna racing and the ‘Terance Conran meets Gilligan’s island décor’, are almost as exciting as the menu of The Cape restaurant. You could eat here every night and still be delighted by the deliciously imaginative dishes and the easy going efficiency of the staff. If you can bear to drag yourself away from the further exploration of The Cape's menu for a night, there are some charming and quirky little local places scattered further up the road. 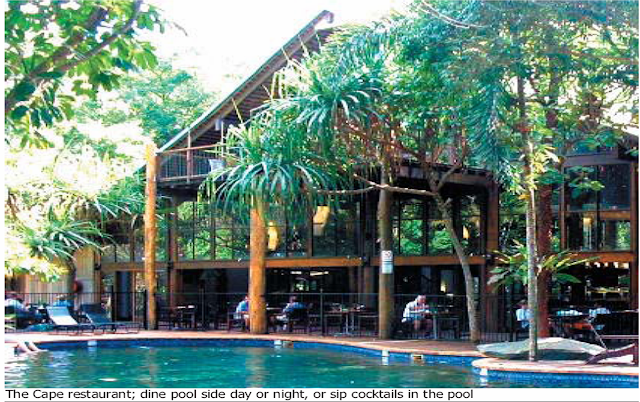 The Dragon Fly gallery restaurant on Camelot Close off Cape Tribulation road (07 4098 0121) is a popular place, but don't think of dropping in without a booking.  If it’s a little more Gilligan than Conran in décor, considering it doubles as a local art gallery that’s to be expected, but on all accounts it oozes tropical paradise.  The staff, are hospitable and laid-back in the extreme without leaving you wanting in the service department.  Lashings of local witticisms are dished up with the excellent and eclectic selection of food, but both often need translating to non-Aussie tourists. 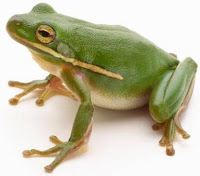 Dining out tip number one: In far north Queensland it’s a little like eating at your folks’ place, seven thirty is considered a late dinner and most kitchens close around eight to eight thirty.

Dining out tip number two: If your table on the terrace is decorated with a garishly coloured frog, it maybe a piece from the gallery, but check with the waiter before you poke, OK?  There’s also plenty of wildlife here, although somewhat smaller than your galloping goannas.
Speaking of wildlife, the Nocturnal Rainforest Walk, could more aptly be named The Bug Tour and quite underwhelming at the price.  The brochure can whip you into a frenzy of anticipation imagining the thrill of shining a nice bright torch into the unsuspecting eyes of reptiles and cute furry things, perhaps even the elusive cassowaries.  You may be a tad disappointed by a bunch of spiders and jumbo-sized mosquitoes and the odd cane toad being given the Steve Erwin ‘crikey, wow, awesome’ treatment.  The guides get full points for enthusiasm and showmanship though.  Sometimes they just don't have much to work with, and you'll never have ‘creepy crawlies’ presented with such mystique. 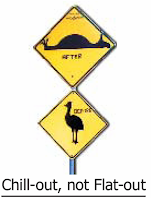 Cassowaries were another disappointing no-show, but considering these birds are almost extinct you could hardly expect a cabaret. if you do find yourself at a loss for a Cassowary Kodak-moment, there are a number of cute road-signs to film that have been imaginatively vandalised by local artists.

The fact remains you could see more wildlife poolside, eating dinner or relaxing in your bathtub.  The resort’s Daintree Retreat rooms, have floor to ceiling windows in the bathrooms overlooking the rainforest, so you can watch the nocturnal nightlife (sans humans) from the comfort from your own bubbles.

Odyssey H2O Reef tours can fairly be given the ‘crikey wow awesome’ rating.  Unlike some ‘Dodgey Brothers’ tours you can take further south, no one here will cancel your trip last minute because of a hangover or that the size of your group, isn’t worth leaving the telly for.  The cheaper alternatives have their merits (they’re slightly cheaper), but Odyssey has all the bangs and whistles, including a reasonable lunch, mini souvenir shop that sells underwater disposable cameras and by nautical standards, a reassuringly glamorous toilet.  If you think that’s a trivial luxury, try throwing up on a boat that’s rocking better than Elvis, while pumping the flush lever the required fifteen times; before and after. 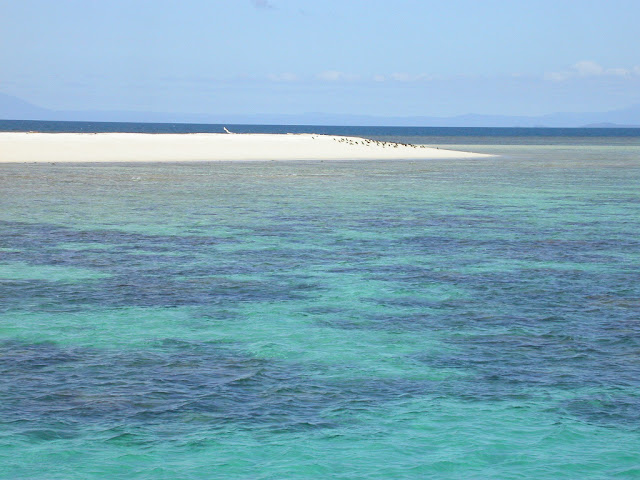 Snorkeling may be considered wimpy by seasoned divers, but on the Great Barrier Reef at low tide beauty is only skin deep.  It also ceases to be a poor man’s dive when you have a Harry Butler-esque tour guide swimming at your side, pointing out the many wonders below, even picking up little creatures for you to hold. Beware of the little sea cucumbers as they’re passed around the group, they’ll projectile pee at you unless you think to point them at someone else first.

Floating on the current, you can cruise with neon-bright fish and free dive with sea turtles in and around the coral shelves just as much, if not more than those elitist black rubber clad types with their copious fish scaring bubbles and bulky tanks.   However if you want to join that elite, but you've never dived before, you can make an 'intro dive' with an instructor. This involves a lesson on the boat and a lesson in the water holding onto what looks like a ballet bar attached to the boat.  when you're ready and confident its off into the deep for a really up close and personal encounter with The Reef.

Another plus H2O have over the cowboy outfits is that they are incredibly sensitive about preserving the environment, while protecting us dumb tourists from ourselves.  The local cowboys can be a yee-har fun bunch of dags to hang out with for the day, but they tend to be a bit less than green when it comes to natural resources.  Maybe that explains why the saltwater croc’s menu often has locals on the specials board, but rarely ever tourists.  Familiarity breeds contempt.

If you’re all toured out, there are a number of secluded swimming holes and falls in the area, reminiscent of old Tarzan movies. No crocs here, but don't forget your repellent, the mosquitoes can be ruthless.

The beaches are mozzies-free, extraordinarily beautiful and tempting until you see sign boards sporting scary illustrations of stick-figures being savaged by stick-jellyfish.  They include optimistic, first aid diagrams for pre-paralysis stick-figure victims and helpful sport bottles filled with vinegar to douse any wounds.  Coconut beach is safe to stroll along but as you come to the estuary, towards the cape you will find more scary boards depicting stick-figures being eaten by stick-crocodiles. 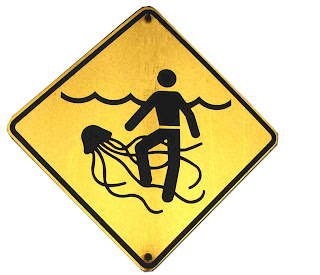 There are no accompanying helpful first aid diagrams, or bottles of anything.
For further information on Coconut Beach Rainforest Lodge  see http://www.coconutbeach.com.au/
Bookings through www.wotif.com for an early season (Mid May) can score you up to a thirty percent discount.