Baby on Board: lessons in diminished pervability... 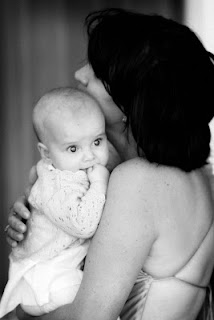 I used to write a column, regular stock market commentary and a daily news feed that Reuters bought reprint licenses for. So I figure there was a period in time where I actually made sense to people outside my family.

Every morning after gorging myself on business news, I’d be surfing Bloomberg, the big banks and the World Health Organisation. I was one well-informed puppy. So there was also a time where I could discuss things outside small people’s bodily functions.

I was also once a flirty-short-skirty party animal with a six-pack stomach known as Champagne Suzy who hated other people’s kids and was a card carrying ‘non-breeder’. Which proves I used to have energy to burn, the time and inclination to be self involved and exercise and I had a sense of fun that extended past peek-a-boo and vegemite face-painting.

Where I used to be able to participate in scintillating conversations about meaningful films, finance, world economies and politics. Now I talk about the four majors that dictate the quality of my life: poo, vomit, tantrums and sleep.

I hardly notice the few remaining non-breeder friends I have, are slowly vanishing as I trowel the net for gingerbread and play dough recipes and for the latest facts on toilet training and head-lice management.

Films like ‘Water’ and ‘Shindler’s List’ used to be profoundly moving to me, but now, one look at that little girl in a red coat hiding under a bed from the Nazi’s and I have to abort.

Stuart Little, UP and Ice Age are eminently more comforting… but still cause for tissues.

Something started happening to me during pregnancy. And I don’t mean my six pack turning into a slab. I became a weepy human chuppa-chup with a basket ball up my jumper, with my growing absent mindedness in fierce competition with my appetite.

And I mean I was RAV-EN-OUS. I came very close to becoming a food mugger. I swear if there had been a kid eating a sausage roll in front of me on my way to buy lunch, I would have snatched it, right out of his mouth. And I hate sausage rolls. Needless to say they became a pregnancy staple right up there with peanut butter and egg-mayo wraps.

I sort of figured I was having a girl too ‘cos she was chomping through my butt and thigh fat. I figured only a girl would think to do that for her mummy, and I was right.

Nonetheless, my incredible shrinking thighs and bum did nothing to help that sinking feeling that I’d never be perved on again. Except by my husband of course, but then its kind of his job isn’t it? (shush honey, no-one asked you).

Early pregnancy is hard in that you’re hideously tired and pukey and you can’t complain to anyone. You feel heavy but you’re still in no shape to be offered seats on the bus.

While being fascinated and delighted by your pregnancy and what’s happening to your body accommodating this little invader, there’s also that nagging feeling that you’re not quite so elastic anymore and maybe ‘after the fact’ it wont just all ‘snap/ back into place like a sexy new La Perla g-string.

I was fortunate in the timing of my up-the-duffage as empire lines and baby-doll tops and dresses were having a renaissance. I lived in loose tops and mini skirts and as winter came on, I added fishnets and knee-high boots. As hard I as a tried for years to have a baby, I was subconsciously resistant to what I saw as the inevitable unpervable state of pregnancy.

Then it happened. The cute Spanish guy in our building perved, and big time too. I caught him in the reflection of the glass entrance doors, as I passed through, turning and checking out either my arse or my legs, (like I cared which). He was chewing on the top of his takeaway coffee and I was thrilled.

I passed him a lot in the first few months and each time I sucked in my gut, which actually wasn’t a gut of course and not nearly as easy to suck in, but I gave it my best shot.

Home time was like a Pilate’s work-out for the day: I would suck in hard to walk past Carlos, work my pelvic floor for two blocks then at the bus stop, arch my back and push it out hard to get a sympathy seat.

I carried on like this for several months till I started to really pop out and my long loose winter coats wouldn’t close over the bump anymore. Not to mention the struggle I had to zip up my boots over my hobbit ankles: man, it was like someone had put my legs on upside down and my thighs where slouching over the tops of my feet.

But I distinctly remember the day, coming back from a meeting, when Carlos perved for the last time. I was standing on the opposite kerb facing our building talking on my mobile and he was smoking, drinking a coffee and leering me. (this is multi-tasking for the single guy) I thought OK this has to stop he has no clue.. and I turned sideways.

He looked like one of those cartoon characters when their eyes pop out of their heads a few feet and then back again. I smiled to myself and decided it was time to take the mumminess seriously and stop stressing about my diminishing perv potential.

It wasn’t (and shouldn’t be) just about me anymore and I was cool with that.

P.S what is more fun than peek-a-boo and vegemite face painting with someone who is really into it?
at 10:59 PM 2 comments: 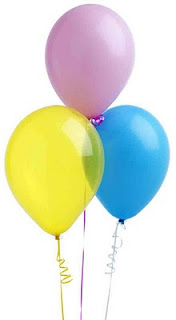 I am afraid of balloons.
There I’ve said it.
And they’re everywhere: in pharmacy windows, mobile phone retailers, electrical stores, you name it.  What is wrong with today’s store merchandisers that balloons have become the décor du jour? There are other ways to dress up a retail display, people.

My little girl had a helium balloon obsession, now it’s an every balloon obsession – including those in books and on TV.  They excite her, she wants them, she sleeps with them and they are her friends.


I live in mortal fear of stopping at traffic lights where there's a car dealership. I know that within 10 seconds, Lucie will be in floods of tears, arms waving, fingers pointing, screaming from the back seat "I want bubbles! mummy get bubbles!"
Just try explaining to a two-year-old with limited language and no emotional control, that it’s pretty bloody impossible in any traffic, let alone peak hour, to forgive one driver exiting their vehicle to dash into to rip a balloon of the windshield wiper of the nearest Prado.
Everywhere I take her now, I try hard to avoid them but it’s inevitable, There’s at least one performance of the tribal dance –the flailing arms, wiggling pointing fingers, the tear stained face and the forlorn wailing: “baaaaaaaaaaaabbooooool.”
Sometimes this bubble obsession includes balls, tennis balls, beach balls, rubber balls, round ball-like buttons, and those are the days I’m in deep doo-doo – tap-dancing on a minefield. She had one truly spectacular meltdown over a pop-up greeting card in the post office, festooned with pop-up cardboard balloons and my God, was that the longest queue I’ve ever been stuck in.
Our first nap-with-balloon was a balloon-on-a-stick. Lucie looked unbelievably cute sleeping on her tummy with this big orange Pumpkin Patch bubble resting on the back of her head, hair all static and sticky-uppy, and the stick still firmly clasped in her right hand.
I’ve since found that its much easier when she sleeps with the helium ones, at least they float over the cot, rather than in it, and the string's are easer to slip out of her fingers, if she doesn’t just let go during REM sleep. hmmm
She takes her balloons in the car, where the helium ones are actually more problematic as they tend to drift towards the windscreen. This can be a bit more than a bummer in the kamikaze traffic that is the school run.
On our last holiday she conned a local jeweller into dispensing a balloon from one of their window displays.  I’m thinking now that sitting in a retailer’s doorway howling might also be effective in procuring discounts?  So anyway this ‘bubble’ went everywhere that day including a trip to the beach. I have heard that to some people the beach is place of relaxation…
Needless to say the balloon buggered off, while she was busy crushing one of daddy’s sand castles.   To everyone’s relief and amazement, she seemed actually more fascinated than upset as when watched it float towards the sun.  But that didn’t negate the hour and a half of total nail biting angst both parents and friends of parents had to suffer prior to the evacuation.
I usually manage to draw the line at Balloons in the dog-park (usually), but she occasionally persuades me (read: earth shattering tantrums) to let her hold one (or two) while she’s riding her trike.
So if you’ve noticed a crazy tired looking woman occasionally struggling along busy Military Road, pushing a toddler on a trike, also clutching at a dogs leash (with said dog randomly jumping around as his paws get run over) with a balloon on a long string bouncing off her face, well that would be me.
That reminds me I have to go now and remove the balloons (today there are two) from her bed.
at 10:02 PM No comments: