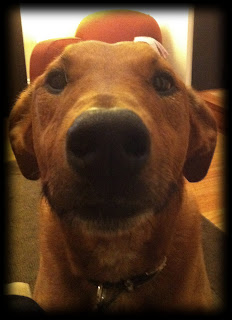 If I've learned nothing else this week, it's that dogs and lip-gloss, like pre-schoolers and shopping centres, DON'T mix.

Our long suffering mutt the heroic survivor of many attempts at being ridden, accessorised, plastered in stickers, and had pretty much every appendage pulled on (yes 'that' one too) has now been subjected to animal cosmetic testing the stuff of which beagles' nightmares are made of.

I used to work for a cosmetic company and with all the furor about these companies testing on animals It used to conjure up so many strange images for me:

Like rows of guinea pigs strapped to reclining chairs in front of stage mirrors with people in lab coats mercilessly applying blue eye shadow and caking on mascara.  All the while the guinea pigs are yelling;  "NO STOP Noooooo! Oh Lord, I look so cheap!" This picture inevitably lead me to visions of the aftermath where  the guinea pigs, having been released, are in a bathroom somewhere scrubbing their furry faces with cold cream and  balled up tissues.

I can tell you It's not so funny when you see your own animal with a panicked expression watching the approach of a fully loaded lip brush.

So that was the first and last time I bought She-Who-Worships-Pink children's, or any other kind of, lip gloss. Subtly tinted or not, it still reeks of synthetic something-not-entirely-unlike-strawberries, it's sticky, it stains the sofa with grease and upsets the dog to have plastered on his little black lips.  Maybe he's born with it - maybe its Maybeline

It was a bad idea, as was the thing it was supposed to provide a 'soft' solution for - a shopping trip with cranky child in tow.  In theory; a little treat to stave off more serious choices and avoid another epic biblical shopping centre tantrum, of course it didn't come close to working. The road to parental hell is paved with such 'theories'.

And it's like the acoustics are just too tempting anyway so she's just got to try out those lungs and test the echo.

But where shopping centres were bad enough with all those $2 rides at the foot of EVERY damned escalator, now you're tripping over toy vending machines filled with happy meal style evil plastic junk that kids love with a passion.

You need a lot of gold coins for these puppies and even If you have enough gold coins on you, just try explaining to your 3.5 year old that you can't choose which toy comes out despite the alluring display on top.

But despite the public meltdowns and the would be contradictory screech-fests, Lucie apparently loves shopping.  Well I do too, but NEVER with her along for the ride.

It was 4.45 am the next morning that I heard noises downstairs and it didn't sound like the dog having one of his vocal leg wiggling dreams.
Dead giveaway: there was a light on too.

I found a dining chair pushed up to the wall where the light switch was and my little princess was wandering around with her rag doll in the stroller and a paper carry bag looped over the handle.

She picked up one of the dog's chew-toys and said brightly 'Hello how are you, I'll take this.'

I yawned and I must have looked confused because she qualified: : "I'm shopping! " I love shopping."
Buddy yawned too and gave me as knowing a look as a fur-face can: Read my sticky lips - NO MORE shopping trips.