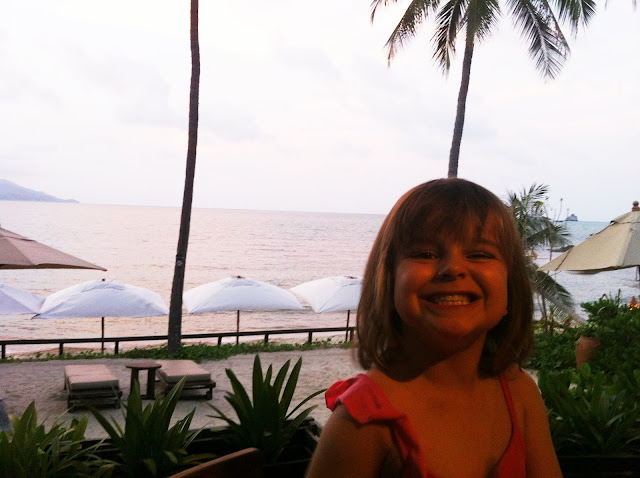 DAY 1:
This is not my beautiful resort… I shoulda oughta known when the Melati Resort PR Manager met us at the airport.  My first thought was ‘wow, that’s service for you’ Turned out it was a case of; ‘do you want the good news or the bad news’ Ok he’s in PR – he phrased it a bit better than that.

Bad news: there was apparently a terrible mix-up between online bookings & direct bookings resulting in over-booking and we have to spend one night in another resort.  The good news – (kind of) we’ve have a pool-villa for the night in this more expensive Sala resort. And tomorrow when we will be transferred to our originally booked Melati we will be upgraded for the week to another pool villa. 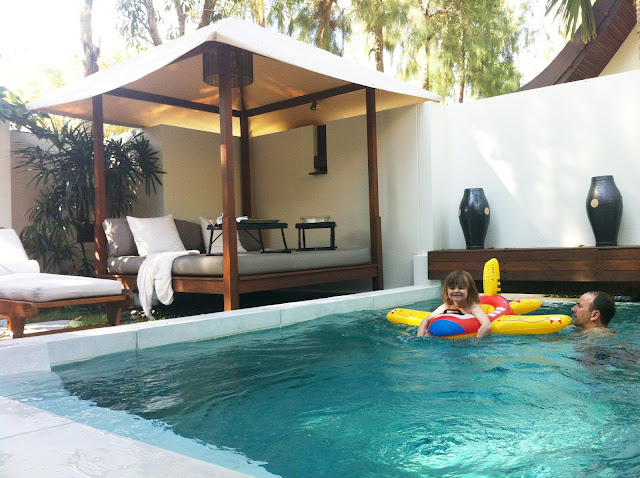 Service is a bit like Bora-bora as in-oooh so veery relaxed- but aside from the random cockroach & the odd mozzie-its really very nice. It has one of those very chic designer outdoor bathrooms enclosed in floaty white georgette curtains.. that do not keep out the mozzies so I will not be taking a soak in the tub anytime soon. As it is every time you pee you pay for it with ten bites on your bum.

But despite the mozzie infested bathroom, it’s a bit glamorous and I’m hoping Melati isn't a let down after this. I felt a bit sorry for the PR manager, him being the messenger to be shot.  I guessed he was up for a loooong & abusive day. But geez guys, try travelling with a 4-y-o who's has five hours sleep in the past 24 and not give her a place to lie down when she arrives.. do these people have children??

﻿﻿﻿Well, after we finished happy hour followed by a seafood  bbq.. & by the way; Does NO ONE dress for dinner anymore? Lucie looked like a red-carpet candidate in comparison to the average punter. We're not in Paris that’s for sure but just as well since I left my Hermes scarf at home!(yes only one - a scandal by Parisian standards).
Ok I’m not that toffy, but do you want to try and enjoy your sunset dining experience facing Madame et Messieur Butt- Crack’s lower décolleté ?
﻿﻿﻿﻿﻿﻿﻿﻿﻿﻿﻿﻿﻿﻿
But after multiple  margaritas, slouching on a beach banquette, sandals at my feet and the sun slowly sinking below the horizon (as am I).
Have I mentioned that motherhood has turned me into a lush?  Anyway I'm feeling especially forgiving - happy hour tends to do that to me, fortunately.

Did I mention the fabulous pool? We cant get Lucie & her inflatable aeroplane out of it.
﻿﻿ ﻿
But, OH god, yesterday we where in residence on the banquette next to families Benson & Hedges ( cough much everyone?)- today its two very loud Israeli  families- oh how they love to sing nursery-rhymes. Gaaaaaaa !  Think I'll get Lucie to hit them with a few dozen verses of Crabs & Seashells ....
﻿﻿
Sala is a lovely resort, despite the neighbouring banquette-babble. the villa is gorgeous, but we'll be relieved to say goodbye to our  little private pool, clearly designed by Death-Traps-R-Us.

Not to worry- we're hitching our wagons at high noon so we'll see soon if we need to get outa Dodge (Melati) too. Maybe it will turn out & the villa upgrade will be worth the awkward logistics. ???

Lush and Eternal optimist, me. 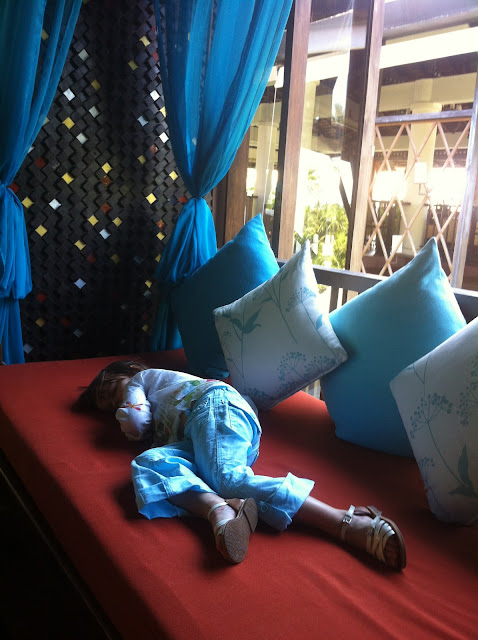 Ok the foyer scared me, I looked at the garish tiled pillars and the gilt-framed paintings of Thai-royals over the entrance and I developed a nervous tick. (Too much kitschness can bring me out in a rather nasty rash actually) I thought, this ‘aint Philippe Stark (or even IKEA)

But the pool villa rocks my socks off! ( or would if it weren't too hot to wear them) Nice big bedroom with a dressing room, enormous bathroom, separate Lounge come bedroom for Lucie, where you can actually open the doors & sit on the floor, paddling your feet in the pool still watching TV - which Lulu thinks is an excellent concept...

Hang on a minute...the penny drops and my smile turns into a mask of horror . Lucie's - sliding -bedroom door - opens - directly - over - the -flipping - pool!!!!

Another Death-Traps-R-Us product -gaaaah
We spend the next 30 minutes tampering with the lock so that sucker wont open... Ever again.

On the upside the little pool has gentle steps rather than an underwater, skull-cracking-body trapping shelf, which we consider a definite bonus.

Pool villas; equal parts luxe & danger. On one hand u don't have French & Italians confiscating the best shady pool-side-pozzies with a strategically placed towel & a hat FROM 6AM!!. (How bloody annoying is that?) On the other hand you & more importantly your offspring are eating sleeping & generally scurrying about 'inside' the safety fence.
﻿
﻿

﻿﻿﻿Ok enough about pool etiquette - lets talk about hair.
I have left my hair straightener in <gasp>.
﻿﻿
Ok in 's humidity my hair resembled a sheepskin car seat cover and I had my straightener on that trip- so you can only imagine... Lucie bless her says I look pretty like her Barbie (See photo & you'll understand why I'm not flattered)
Laurent compared me to Nicole Kidman circa Day's Of Thunder' still not sure if that’s good. But since he managed to swipe a bougainvillea with Lucie's pool plane, puncturing it,  I am grateful that in my  packing panic I put a puncture kit in my toilet bag instead of my straightener :0)


Finally after much debate and four holiday- hair-look-alike runners up, we decided on Fatal Attraction's  Glenn Close -" [the hair] will NOT be ignored"
.

﻿﻿﻿﻿﻿
﻿﻿﻿﻿﻿﻿
DAY 3:
﻿﻿﻿After a post breakfast, re-enactment of The Exorcist- read: projectile vomiting ALL over & around our poolside lounge, our clothes, towels, shoes and Barbie- Lucie feeling the lightness of losing her load and bursts into song in the bath-tub.  Her previous aversion to all things bath- related completely forgotten...
﻿

Barbie manages to keep smiling now the vomit has been washed from her blonde curls, and it seems we are in for the afternoon watching Puss in Boots on loop.

All traces (smells, stains) of the carnage from our little Lynda Blair are gone and forgotten - just another day at the office.. Not so much Perhaps for the smarty-pants punters who 'reserved' their places by the pool next to us  <he he>  :0)
﻿﻿﻿﻿﻿ ﻿﻿
DAY 4:
Some of the tourist activities should come with warnings beyond 'dont litter' (which even the tour operators ignore).  I have a few suggestions here;

(1) Beware of smiling polite pharmacy assistants who will charge you 1000. BHT ($30) for insect repellent if they can get away with it

We went to look at waterfall two which involved five long minutes being thrown about in the tray of a 4x4 having our butts scalded whenever they hit the scorching black vinyl bench. Then poor husband proved his worth as a mountain goat, carrying our daughter on his shoulders up a rough-as-guts track about long. We nearly gave up at the mark. 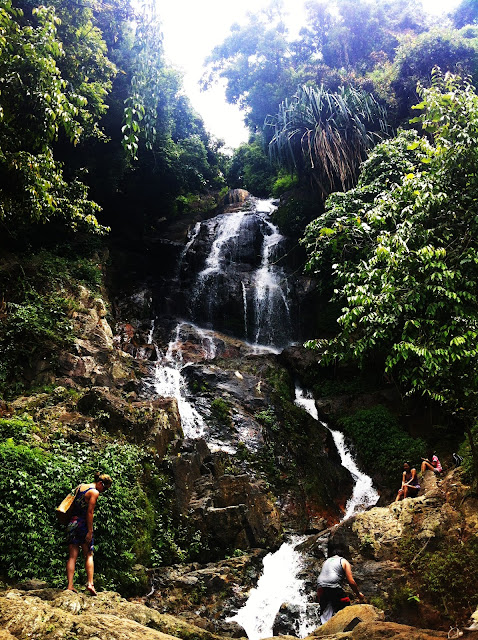 The waterfall's pristine beauty was totally lost on Lucie who had decided from about  150metres that she would face her fears and ride an elephant. This is all we heard about for the next hour as we struggled up and then down the other side of the horribly scary track.

Which included another kind of ride for Lucie; across the waterfall from boulder to slippery boulder, clinging onto a very sweaty Daddy-goat. It was about and 150% humidity by this stage :0/

Apart from the huge red ants raining on me from god-knows-where, the Elephant ride was waaaay more kid ( and parent) friendly.


﻿
Lucie was so proud, once again she burst into song. For Mrs Elephant's pleasure were honoured with delightfully creative versions of Baa Baa black sheep & twinkle twinkle little star. (I'm afraid Lucie takes after her father when it comes to lyrical accuracy & innovation).
Stopping for a late lunch in Fisherman's Village could have been appreciated a bit more for it's quaint little market stalls and waterfront cafes, excellent fish menus…unfortunately nursing a mild dose of post-traumatic stress disorder, Lucie wasn't the only one feeling tired and tantrummy. The morning's hill/rock climb (and the red-ant slap-fest) had just knocked the stuffing out of us.

And I still chew my nails remembering following my husband with our child perched on his shoulders , staggering over a hand-made bamboo escarpment that a Circ du Solieil performer wouldn't touch with a barge-pole.

The next tourist warning sign I read said 'no nude swimming'.
Yeah super-helpful that one..
﻿﻿ 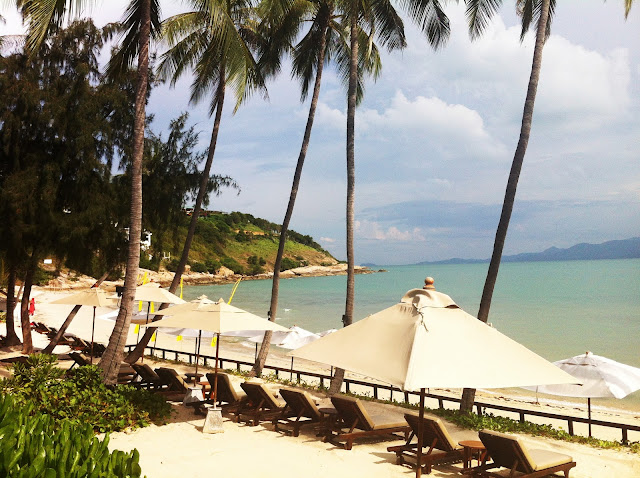 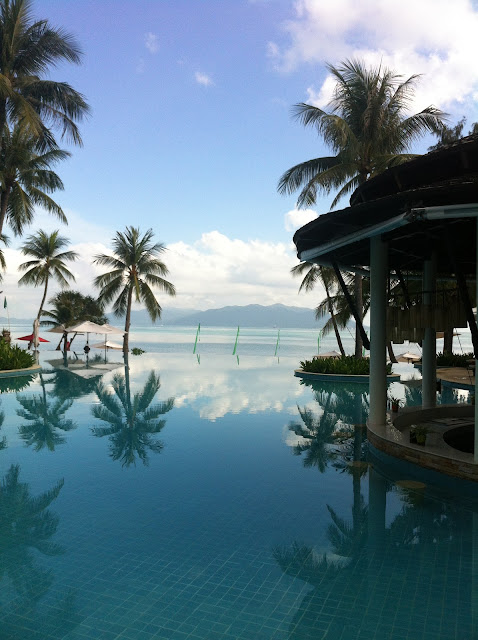