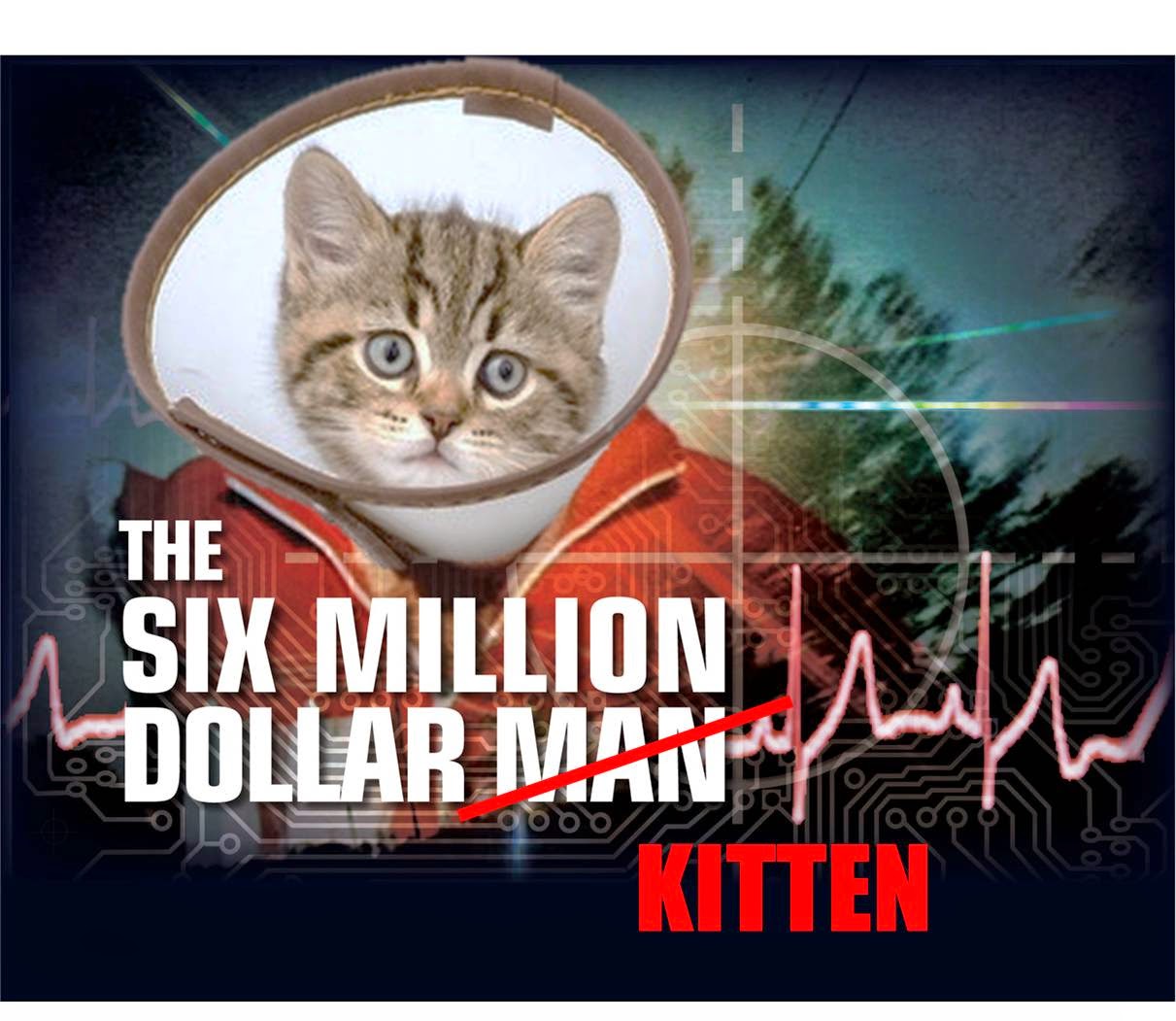 "Gentlemen, we can rebuild her. We have the technology. We have the capability to make the world's first bionic kitten. Cutiepie will be that cat! Better than she was before. Better... stronger... faster. "

If charity begins at home, what do you do when you decide to boycott pet stores and adopt a rescue kitten who then ends up with an infection within 24hrs and costs you four times what you paid the rescue centre?

You suck it up of course..

On Cutiepie's ( guess who named her?) third Vet visit in her first week with us, I asked She-Who-Worships-Pink (who is now She-Who-Worships-Kitten) if she would like to exchange this kitten and get another of the ones she'd almost chosen?

There was an edge to her voice that heralded the onset of many tears; "NO, I LOVE her!"
"Just checking" I said as we turned into the vet's car park.

I wasn’t really serious, We'd had her almost a week and she'd made quite an impression despite the lampshade on her head. She’s the most curious cat I’ve ever met. She’s thoroughly inspected my make-up case, my shoes, every open drawer and cupboard. She’s watched Pinkster in the bath with a clear expression of abject horror. She kept coming back to the bathroom doorway to check to see if the kid was still soaking. When the orange dog decided to join the party and cop-a-squat accross the doorway, she literally elbowed past him and took up her watch from the shower recess. First time I’ve seen ‘incredulous’ displayed on a furry face.

And speaking of the Orange Dog, she’s been busy training him. He’s never been big on barking but he can whinge up a storm and none of us are fans of that.  So when he whinges at her she arches her back and hisses. When he stops and sits, she walks to him and gives him a little kiss on the nose and if he stays like that he gets a rub around his front legs too.

She’s quite a funny playful little thing and reasonably good humoured and compliant regarding all the ongoing discomforts. She’ll forgive and forget the nasty stuff shot forcibly down her throat, and the reatachement of the bucket over her head and within minutes be purring in my arms. She sounds like a lawnmower.

When you take on a pet, you take on the responsibility for their continued health and its related expenses. We were just unlucky, I guess that these expenses started adding up the day after we brought her home.

Her wound from being recently de-sexed was infected, she became hot and listless so I took her to the Vet the next morning ca-ching: $90 consultation plus $124 in anit-biotics and pain relief.

I’m always moaning what human pharmaceuticals cost, but sheeesh: drugs for animals seriously beat up on your credit card.

Poor little thing had a fever and her wound looked red and swollen. She had a follow up consultation for $50 five days later then another. I figure they’re too embarrassed to charge for this one as they’d just quoted $370 to open her up again and sort out the infection – so she was booked in and as of tonight I’m another $410 down. (they didn’t include antibiotics in their quote).

So the total sum of this 7-month-old kitten is $871.80 and I guess we still have to pay to have the stitches out in ten days.

Being almost a thousand dollar (stray) kitten we'd better keep her indoors from now on. Maybe I should add our bionic kitten to the home contents insurance too!

Image credit for that cute kitty above.
at 8:56 PM 2 comments: