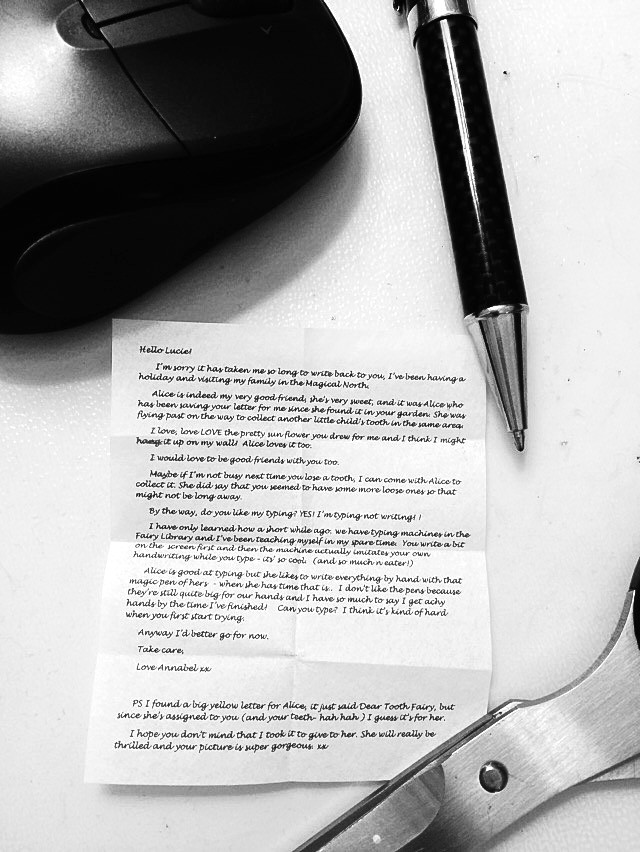 These darn wobbly teeth have been wobbling for months now and still no definitive movement! Pinkster is getting so frustrated, waiting for another coin and more importantly, a letter from the tooth fairy.

During the first spate of lost teeth - sometimes two in a week, there was a lot of correspondence, drawings and pressed flowers exchanging hands.  So missing all that tooth fairy social interaction Pinkster has taken to leaving notes in the garden addressed the tooth fairy.  And to the tooth fairy's friends for that matter. 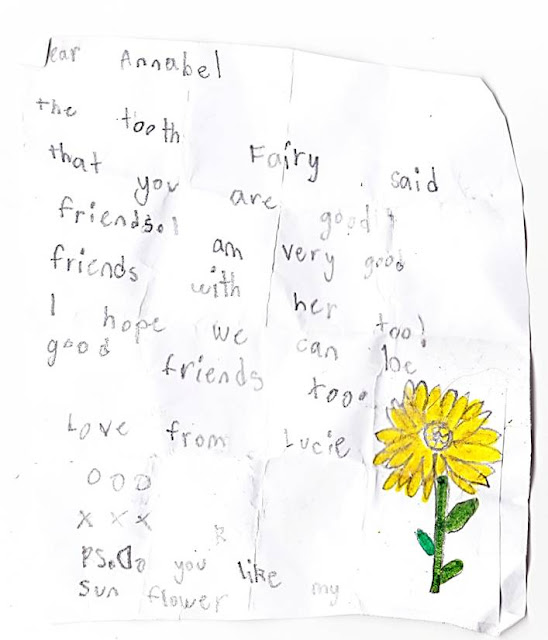 It often takes a while to get a response, since the fairies have to be flying over our place and notice the notes, in the dark, while avoiding the cats and the possums.
But still they manage these clever little things, and this tooth fairy although she's only a friend of 'our' tooth fairy (Alice) she replied...


I’m sorry it has taken me so long to write back to you, I’ve been having a holiday and visiting my family in the Magical North.


Alice is indeed my very good friend, she’s very sweet, and it was Alice who has been saving your letter for me since she found it in your garden. She was flying past on the way to collect another little child’s tooth in the same area.


I love, love LOVE the pretty sun flower you drew for me and I think I might hang it up on my wall!  Alice loves it too.


I would love to be good friends with you too.


Maybe if I’m not busy next time you lose a tooth, I can come with Alice to collect it. She did say that you seemed to have some more loose ones so that might not be long away.


I have only learned how a short while ago. we have typing machines in the Fairy Library and I’ve been teaching myself in my spare time.  You write a bit on the  screen first and then the machine actually imitates your own handwriting while you type – its’ so cool.  (and so much n eater!)


Alice is good at typing but she likes to write everything by hand with that magic pen of hers  - when she has time that is..  I don’t like the pens because they’re still quite big for our hands and I have so much to say I get achy hands by the time I’ve finished!    Can you type?  I think it’s kind of hard when you first start trying.


PS I found a big yellow letter for Alice, it just said Dear Tooth Fairy, but since she’s assigned to you (and your teeth- Ha Ha ) I guess it’s for her.


I hope you don’t mind that I took it to give to her. She will really be thrilled and your picture is super gorgeous. xx

This was that yellow letter.. 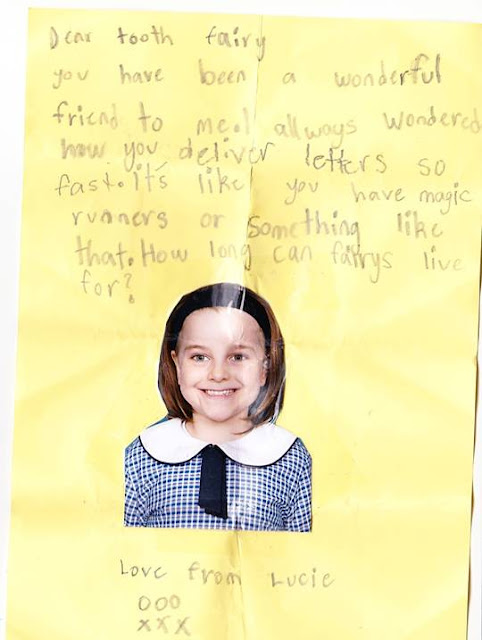 And fairy Alice, reliable as always replied too on that same almost transparently fine stationary they use...


Thank you for your lovely letter, Annabel found and brought to me. Such a pretty picture of you! Thank you so much!!!


I laughed at your idea about magic runners, that would be a great idea for those times we get caught in the rain and our wings get wet. You have no idea how that messes up the tooth collection schedule!


So Anabel insisted this time, I go to the library and use the typing machines because she says my written notes are all wonky. I didn’t think they were so bad, maybe my lines aren’t very straight, but she’s right- the magic pens are hard to use if you really want neat writing.


And anyway it’s been a busy week for us, on account of it being so windy these past weeks!  Simply awful tyring to fly in the wind, but especially carrying coins, not to mention paper and magic pens!  I lost half my paper to a gust of wind just last week!


One night I was so late and it was so windy, I had to hitch a ride on an owl.  Owls are really quite sweet and helpful when you ask nicely. And they are very strong flyers.


So how long do we fairies live? We don’t measure our years the way you do, but I suppose in human years, it would be maybe 300 or so?


So I have to wonder… are those wobbly teeth of yours every coming out?!?!
I’ve been waiting ages! I’m so glad you wrote to me anyway if I had to wait for a tooth much longer I would have to fly past and wobble them myself just to hurry things along so I could have a note from you.


We’re actually not supposed to wobble children’s teeth- it’s breaking the rules. The boss says: “they have to come out when they’re good and ready!’


Also I must say, your cat is a bit scary!  I stay well away from your mum’s room when I come. Your dog I have met and he wagged his tail so much, it was like a fan and I got blown backwards. I had to flap my wings quite hard to get close enough to him to pat his nose! He’s a lovely boy and I don’t think he’d let the cat near me, but still…


Well as I said it’s a busy time because of all this crazy weather so I’d better get going.


Take care Lucie, and I look forward to your next tooth.

These letters are so tiny I have to wear seriously strong glasses. When Alice writes by hand I have to wear those glasses and hold a magnifying glass over the tiny page to read it at all!

I thought it was interesting the mention of The Magical North, which is a place mentioned in Jaclyn Moriarty's Colours Of  Madeline Trilogy books.  Maybe Jaclyn pulled the name from a childhood memory of her Tooth Fairy?  Perhaps that's where fairies come from - through cracks between our world and the Kingdom of Cello... 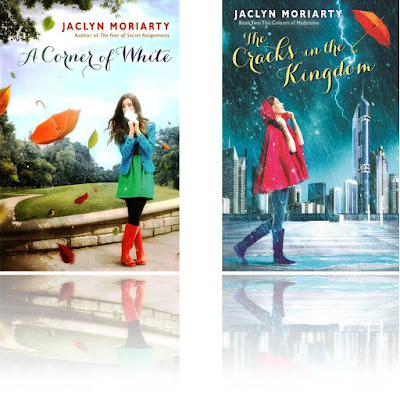 I've been reading this first book, A Corner of White, to Pinkster and coming to the end, she was getting quite stressed to be leaving these wonderful characters and magical beings like the Butterfly Child.  But I've assured her I have the second book and now she's  a bit more relaxed about it.  But I must say sometimes we're reading well past bed time because the story is getting a bit too exciting - Pinkster's own gasps of revelation are often keeping her awake!
Better still, a little bird told me that the third and final book will be out early next year. Yay!

I'm sure that the next question Pinkster asks the Tooth Fairy will be; 'Do you know any Butterfly Children?'

Email ThisBlogThis!Share to TwitterShare to FacebookShare to Pinterest
Labels: A Corner of White, Butterfly Child, Colours Of Madeline trilogy, Jaclyn Moriarty, The Cracks In The Kingdom, tooth fairy 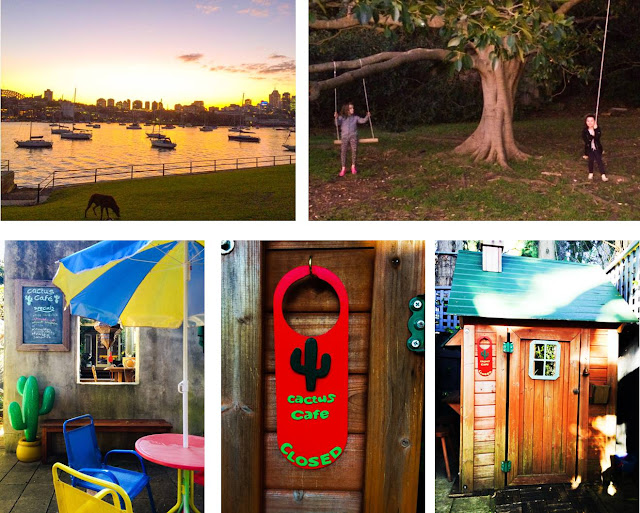 In a savage attack of community spirit, Miss Pink and I have flouted the fine print on the Local Council’s OH & S charter and erected two rope swings in our local park.

To hell with the rules: there’s that big old fig and all its thick curling boughs, just begging for action.

So we did it; recycling timber from the side of my shed and some rope I used for our  IKEA Hack porch swing. Pinkster was my pilot, helping me position both swings for little legs to reach the ground.

They’re very simple, one a traditional swing with rope attached at each end of the seat (and I do use that term loosely) and the second for bigger more adventurous kids/ adults/ drunkards.  A single plank with one rope attached through the centre, for some serious out-of-control- in- all-directions swinging!

So each day since, playdates or solo, has ended at this lovely park. And so far the council sphincter police have not removed our swings.

The Orange Dog is loving it; where he never got used to missing walks on school holidays, especially those days when we were entertaining small people, now everything ends with ‘mummy can we go to the park and use the swings?’

Our other big project this week was the renovation of the cubby house, which is now Cactus Café and Organic Grocer.  Pinkster and her friends have always been keen food servers, so after I found a blow up cactus on the roadside during a council clear up, we renamed and renovated.

Adding shelves inside, an outdoor grocery stand, and long timber bench (also curb-side finds). I bought an outdoor setting from Aldi and IKEA sold us our DUKTIG cash register.

Another curb-side find was a gorgeous rustic timber picture frame that morphed into a stylish ‘specials’ board with the help of timber I had lying around and White Knight Black Chalkboard Spray Paint. (which doesn’t need leaving overnight between coats like the paint of stuff.)

The open closed sign was more elaborate than we’d planned, Pinkster and I, but that’s par for the course with our projects:
I cut a cardboard template and cut out two cacti from craft wood, shaped these with an emery board before paining.  Then I glued these to a make-your-own doorknob sign from the hardware store.  I didn’t trust my hand writing using a paintbrush but fortunately we found some foam letter stickers in a craft shop in the perfect colour.

So between our renovated café and our park swings we’ve kept busy, had a lot of fun and so have Pinkster’s friends.

I think we should start a community spirited movement: Random Acts of Swinging where everyone who can, puts up a swing in their local park for the kids to use.
at 7:55 PM 2 comments: