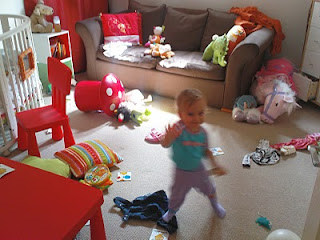 I was a clean-freak long before I gave birth to my mini tornado. I would even go so far as to say I have a little Obsessive Compulsive Disorder when it comes to keeping the place prefect. (I once had to deliberately place unwashed mugs on the coffee table, as a kind of therapy to see how long I could leave them there – and it wasn’t long).

But if leaving used coffee mugs on my pristine table was hard to bear then Lucie has taken it to another level.

At 15 months, trashing her room and emptying her pyjama and sock drawers (then rolling around in the debris, like our dog on the neighbours’ lawn) was just too much fun and couldn’t be done enough.

As she grew bigger her bedroom no longer cut the mustard and she started on the book cases, CDs & DVDs, of which we have many.

So I have followed her around ever since she took to her legs, picking up and trying to teach her to ‘put back’, with limited success. This is somewhat like raking leaves during a hurricane.

Then one day I left our completely trashed living room just long enough to empty the washer and when I returned, I was floored. The living room was spotless and Lucie was bent over the toy box dropping the last toy in saying “put-back”.

I was so overwhelmed I took photos! I guess without the before shots, they were pretty meaningless, but I have them, to look at fondly and remember… the last and only time my little daughter took after mummy and cleaned up!

Maybe I can slot them into the slideshow I intend playing at her 21st birthday party, right after the bath-time nudie run footage, and I’ll say : “look hon. This is the time you cleaned up”.

But whereas my girl has tried it on and seemed to decide it doesn’t fit, her poor sad mother battles on regardless with this debilitating disorder: absentmindedly wiping up the bench tops in public toilets. (sadly true) Using nappy wipes to clean up tables in cafes and local parks, folding up jumpers and tee shirts in shops.

And I tell you that little sign in aeroplane bathrooms that suggests you wipe up for the next passenger, well that sort of encouragement just sets me right off.

It’s either an illness, or a reflex that kicks in post-tantrum. When my brains are fried and I switch to auto-pilot. The cleaning thing is the only part of me that still functions after the screaming suddenly stops, and I find it somehow quite soothing.

Then one day it became practical. I hadn’t got both my feet even out of the car when this council-cow chalked my tyres in a 30 minute park. 29 minutes and I still had my toddler and pram, and the 4.5 kilo brown thing that daily dislocates my shoulder, to extract.

This was probably the only time my excessive use of Huggies Unscented Wipes on surfaces other than my little girls bottom, was actually a good idea, it bought me an hour shopping time. :0)
at 9:06 PM