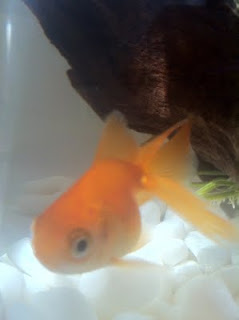 Our goldfish are getting into yoga in a big way - they've pretty much nailed the downward dog pose.

I asked the guy at the pet store if they should be spending so much of their time stood on their heads at the bottom of the tank and he looked worried. He said they were probably stressed - sheesh what do goldfish have to be stressed about; especially when they're yoga junkies?

The fish tank was my brain child. We had to get rid of the dummy at night, said the dentist, said the speech therapist. So I started talking up the dummy fairies and how they could turn dummies into fishes if little children could sleep without them. And how said children had to be sure because it wasn't very nice to sleep with a fish in your mouth if you changed your mind later.

So we made a schedule and on day one Lucie gave me her dummy in the morning and announced 'no more' further qualified by 'turn fishy". The dummies where all dropped into her pretty tank (which had been in her bedroom for a month waiting; teasing; fishless) and she was delighted with the two little fish that appeared, after pre-school, swimming laps.

To cut to the chase it was all going well until she tested the changing her mind theory on that first night, the second night was a breeze, and the third, then the fourth was a shocker again with night wakings every three hours or so.

Well a few weeks later things outside the tank are improving, it's in the tank I'm not sure about.

Maybe the fish are picking up on our stress; her meltdowns, the randomness of blissful sleep throughs followed by shouty all nighters. Or maybe they don't like the collection of butterfly stickers that now decorate their home? Who knows what makes a fish stressed? 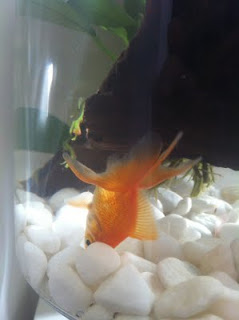 I know what makes me stressed - returning to sleepless nights compounded by the fear of having to explain dead Nemo and/or Pinkie to my three-year-old, while I'm taking care of them like an ICU nurse!

Was I naive in thinking you just bought a bowl, let it sit for 48 hours then whacked in some goldfish? What's with all the rocket science? 10% weekly water replacement, water conditioners, daily stress-zyme additives and bubble blowers and after all that, not so reassuring assurances that "its really hard to keep em alive - the first 6 weeks is crucial stuff"..

They're not heart transplant patients for God's sake, they're bloody fish and it's high time they started behaving like it.
at 9:06 PM