Gullible's Travels- Step away from the baguette... 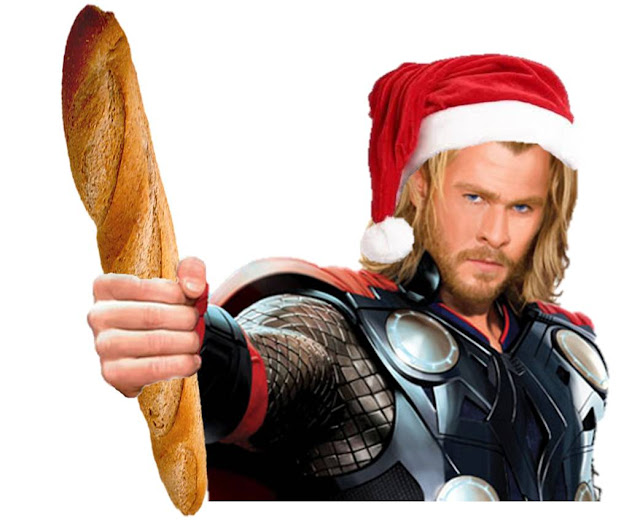 If you want to have any chance at all of upholding New Year's resolutions I suggest you don't (unlike myself) head off to France on a diet. This is a grim undertaking indeed.

After a month on a strict diet and increased exercise, only having dropped a kilo, my herbalist came to the conclusion that my liver, in fact my entire self, was as toxic as a Chinese prawn farm.

So literally a third of my suitcase was filled with herbs, supplements, and meal replacement powdered shakes. And a letter from Dr Liu explaining "To Whom It May Concern" that I am a medical basket-case rather than a drug-runner.

While spending 2-3 weeks in France, a foodies paradise, I have to watch what I eat, drink revolting herbs and avoid baguettes like they're radioactive waste.

However for many, some family get-togethers can ruin your appetite more effectively than Dr Liu's seaweed pills.

Family lunch for father-in-law's 75th birthday was like being dropped into the middle of a Woody Allen film, dubbed in French with no idea of the plot and no subtitles.

My father-in-law (as opposed to my mother-in-law's husband) is eccentric and even with my limited French I was wondering if the birthday boy had developed Turret's Syndrome.
A brunette on the next table kept getting this jarred look on her face like someone was intermittently jabbing her in the arse with a poker- her eyes widening in perfect sync with the old boys expletives. I just shut my trap and tried to stay off the radar for the duration.

The food was fabulous, and I successfully managed to dodge the baguettes.

Checking out FaceBook it's obvious that I'm not the only one who experienced at least one family get-together produced and directed by either Allen or Spielberg.

Christmas is tough. Grown-ups consuming copious amounts of alcohol while the kids turn feral. And despite old grudges, sibling rivalry, past hurts etc etc.. the grown-ups try to play 'nice'. Until having had 'one too many' someone cracks, and its the grown-ups' turn to be feral.

Someone very close to me (who shall remain nameless and hopefully still doesn't read this blog) once deposited his Mother-in-law outside on the curb on Christmas Day. I heard the back-story and I cheered. It sounded to me like she was just begging to be put on Santa's 'Very Naughty' list.

I have another friend who's sister-in-law is more caustic than a litre of Domestos, using every family gathering to hurl around disparaging remarks, like rice at a wedding.

In our little family we do the usual thing: one year with my family; next year with his. Well thats the plan Stan. It's a bit of a hike to Bordeaux, France and some might believe more exotic than Philip Island, Victoria.
Exotic-shmotic; if you're a neighbour of the Hemsworth family- I wouldn't mind bumping into Chris in the local chippie- that would be a big tick on my christmas wish list. (sorry darling, but I mean, he's Thor!!)
I wonder if he does one year in Asgard and one on the Island - again it's maybe not so exotic, but you cant beat the local fish and chips.

Anyway our Christmas dinner here in Bordeaux was actually very nice and controversial free.
My SIL (sister- In -law) came with her family over from India and brought some really funky party masks and crazy specs. A couple of years back it was weird wigs, so this was a fun riff on a silly theme.

I find looking around at a table of relatives wearing those paper crowns from the Christmas crackers deeply disturbing. Better to take it to the next level and make a good job of looking silly. At least you can say it was on purpose.

French people don't do Christmas crackers with the lame jokes - such a relief. Kind of useful as breathalisers though, 'cos you know if find those jokes remotely amusing, you've had waaay to much to drink.

Anyway I've been sticking to my diet like cheap $2 shop scotch tape, which is kind of an 75 to 80% rate of adherence.

But at every meal there they are in the middle of the table, golden and crunchy on the outside, light and springy on the inside - those baguettes look mighty fine.....