Swinging in the Rain? 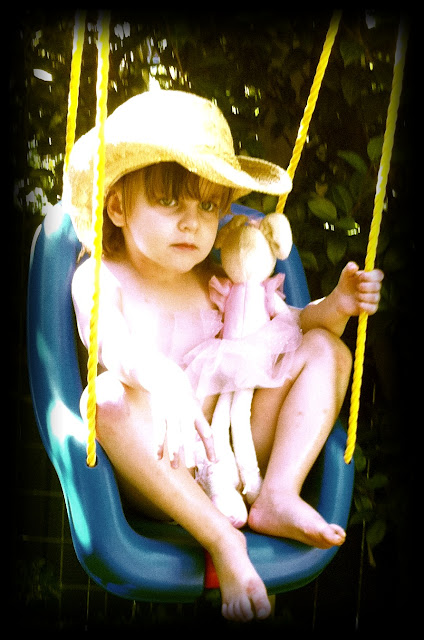 We have a porch swing; this molded plastic monstrosity in blue and red with screamingly yellow rope and aged moldy safety belts. The Pinkster can't get herself into or out of it without help and I can’t get my bum into it at all.

It never really fit with my idea of sitting and gently swinging to and fro - a magazine or a coffee in my hand.
Plus our $40 baby swing is about as aesthetically pleasing as a poke in the eye with a sharp stick. It bears no resemblance to the ones I see in films or home-maker magazines. 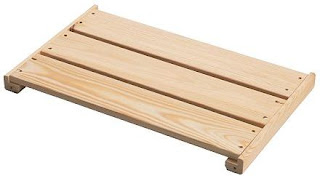 I found a set of IKEA GORM shelves on the curb, waiting for council pick-up, and I figured one shelf was about the right size for the average adult arse and that's where the idea grew from.

So I took two and stared at them for a while. I wanted a seat-back as well as a base and I wasn't sure how I would attach them.

I thought good solid hinges might be the solution - not very strong but I figured if I got the form right - I could work-out the engineering problems later.

To get the two shelves close enough to connect with hinges, I needed to cut one down so it would partially slot inside the other.

This involved Measuring against the other shelf then using a soft mallet to pop out the slats at one end.  I then cut the slats to size and nailed them back onto the frame.

Next I screwed the hinges in place and since the screw ends poked a little through to the seat - I filed these back.

It's always a good idea to drill pilot holes for these jobs so that you don't split your timber with the screws (like I did). Saves a whole world of time repairing or replacing parts.

I cut down the GORM shelf supports and measured then drilled new holes to use the strong IKEA bolts supplied. I wanted these planks to finish off the edges of the seat top and bottom.

Finally I screwed the left over pieces across the ends of the seat to make armrests, of sorts; I marked out in pencil where I needed to trim of the excess before unscrewing and cutting them to size.

So now comes the hard part - how to make the swing stronger and hangable. Intending to use the IKEA-made drill holes where I could and not wanting another wood splitting  disaster, I took one of IKEA's bolts to the hardware store and bought two twin packs of  Galvanised  Eye bolts 75x 14mm (3" long- 1/4 inch thread size).  I drilled holes in the swing that penetrated through both the arm-rests and base, top and bottom. I added more eye bolts into the IKEA drill-holes on the bottom of the seat as well for extra strength.

I liked the way, on our old swing,  the hanging rope threaded all around the underside making it even stronger, so I've used the same idea here. This way the eye-bolds are not taking all of the load because the rope actually sits under the seat itself.

And here is the end result. It just needs staining and maybe some nice cushions - Although She-Who-Worships-Pink has suggested her own idea of colour choice. Yeah right that would be really discreet..

It still needs few more coats of stain to darken it, (what IS it about hardware store colour charts? - no matter what you buy it always comes out orange??) But you get the idea, if all else fails I'll add some charcoal stain in between coats. - So still a bit of a work in progress but meanwhile; a nice place to catch the morning sun. :0)

The beautiful hexagon cushion was courtesy of SewPaintIt.

Just for fun check out my previous posts...

Or click here to look at my previous efforts of making random stuff.