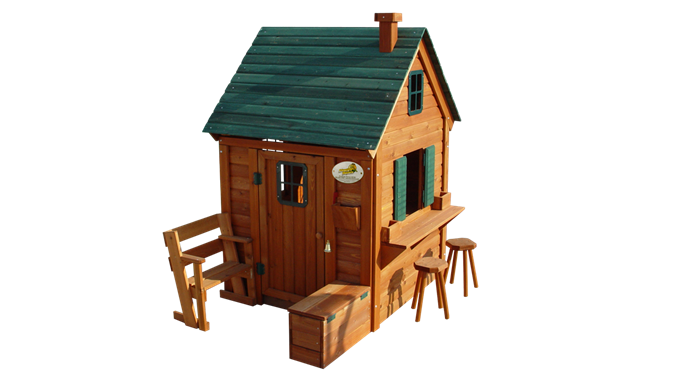 Somewhere, somehow I got bitten by the renovation bug. Watching too many episodes of Sarah Beeny’s property ladder I guess.  But after our last bathroom renovations, which involved a big hole in the middle of our house and having to move out and all, well Mr Frenchie wasn’t keen to go another round.

So I took my renovation addiction outside and I began attacking the She-Who-Worships-Pink's playhouse.

We bought this flat packed over the internet and Mr Frenchie put the house together. It was my job to build the accessories; a bench seat, toy box and window shutters. It was only the latter that didn't pose space problems in our first small garden.

But I couldn’t let all those lovely bits of timber go to waste. No way.

So for a few months I got my renovating fix, tarting up the interior and adding some window boxes and awnings; Perspex window panes, interior shelves, a kitchen…I basically went nuts and just kept going...
First came the window box - this was a plastic job from the hardware store just screwed onto the exterior wall. 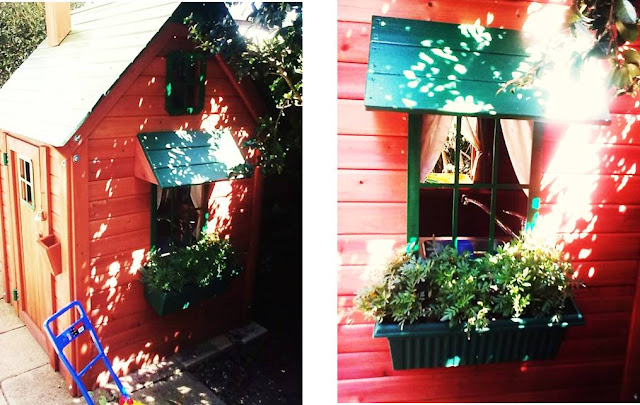 Setting aside the timber for the seat (which would come muuuuuch later), I used the left-over pieces allocated for the toy box, to make awnings for the windows.  These were uniform lengths that I screwed onto triangle pieces and then fixed with more screws onto the wall of the house from the inside.

Then I took a trip to IKEA where I discovered these wood patio tiles, which considering this house had no floor at all was kind of handy. And of course the floor looks fabulous and cost under $40. 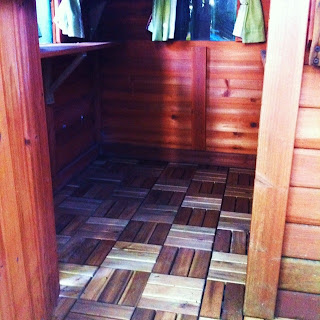 During this expedition I went into the parent’s room which had a play area outside and look what I found:  I thought: “What a genius idea!” (Something I say to myself a lot in IKEA 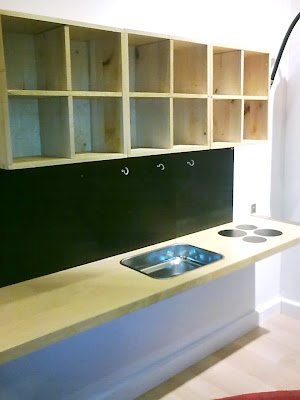 But these clever people had used a shelf, a KONCIS stainless steel roasting tin and 4 black vinyl  PANNÅ coasters to make a little kitchen. 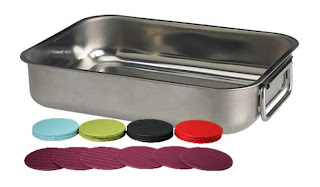 I immediately added a shelf, some brackets, coasters and a roasting tin into my trolley before heading to the check outs.

So if you want to do this in a cubby or just in a bedroom, it’s a very basic, clever idea.
First break the handles off your roasting tin, and then position this on the back of the shelf.  Draw around it with a pencil. Measure the depth of the lip of the tin and draw the shape again inside the first marking by that much.

Use a jigsaw to cut out the shape (or do what I did and ask as handy neighbour to do it for you) Drill a large hole first close to one edge so you have somewhere to start. Clean up the edges of the hole with wood file so that your tin sits in the hole flush with the shelf - its lip preventing it falling through.

I took this kitchen idea to the next level after finding a mixer tap, with some bits missing, being tossed out at the local hardware store.
I also see a lot of these hanging off broken bathroom fixtures on the curb waiting for council clear-ups, or in dumpsters on building sites, so just keep your eyes out for one. 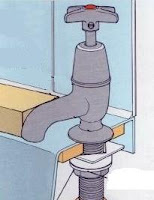 Drill a hole for the tap fitting if you have one and screw it in place from the underside. Taps are like big bolts and come with a giant nut and sometimes clippy things that screw on the underside (see diagram).
I went mad on shelves, again using left over wood from the would-be-toy-box, and my lovely neighbour Gordon cut me loads of shelf brackets with his big kick-arse circular saw. NB if you don’t have a retired engineer conveniently living next door, basic shelf brackets are cheap to buy at any hardware store.

I chopped up some cute kids’ curtains also from IKEA and used lengths of dowel and cup hooks to hang them over the windows.

Other great IKEA additions have been two cheap red picture frames one surrounding a magnetic board cut to size, the other I just coated the picture frame's own backing-board with blackboard paint (except green because it's prettier). The stainless steel cookware is also from IKEA Kids.

Here are some good websites in Australia and the US if you are shopping for a playhouse for your little munchkins.