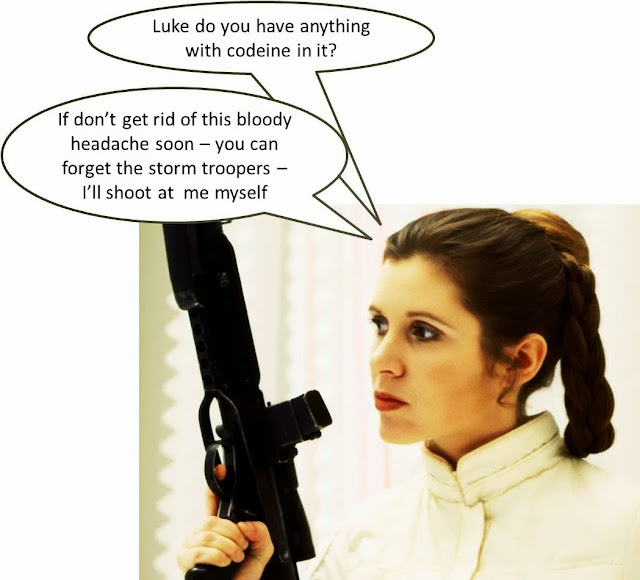 That was my day, how was yours?


It was a six hour grind using some very expensive velvet with a sewing machine which can only be described as a thorough arsehole. But, despite my reservations, (and a sneaky side-trip to a costume store) I made the whole; home-made-Princess Leia costume thing pay off.. Eventually, considering I was still sewing the hair buns on in the wee small hours the night before the party.

But be warned, this is not a tutorial.  I wouldn't know where to begin anyway, I didn't have time to take in-progress photos since I was making it up as I went along the night before I needed it. Anyway my non-sewing audience would be bored  (cardinal sin on this page) by any how-to-ing and crafty types will get the drift.

The hardest part of this project  by far was selling She-Who-Worships-Pink on the idea of dressing as a princess who wears white, or camo, and no tiaras just big black guns.

I spent a week building up to it, selling her on the whole Leia concept.

I mean it's not like I could show her the films, not if I didn't want to give her nightmares for the rest of her life.
So I showed her pictures; "She's not very pretty", I was told.
So I showed her more pictures (including the one above) without 'the buns' just to prove she was pretty.  What did I get for my trouble? "Well I'll just wear my hair long or in a long plait then, mummy".

It wasn't until I bought her Jeffrey Brown's cartoon book Vader's Little Princess  that she conceded.  For a five-year-old; cartoon = gospel.

So now she could identify and her excitement mounted as the velvet and hairpieces took shape.  She was getting quite bossy toward the end; critiquing the authenticity of my belt design. How authentic can it be with craft glue staples and a chopped up silver Barbie box?

The party was a blast with what I like to call an 'in-character-child-herder'; Jedi training included.

Each child was given an inflatable light sabre too which was such a hit.   Several (fortunately painless) hits all round in fact.

I had that sinking feeling when we arrived though, and none of the girls were dressed up; "Please God, no, not after all this build up.." No-one want's their kid to be the odd-man-out.
But there was the birthday boy cleverly disguised as Anakin Skywalker. More mini-Jedi knights arrived a few more Princess Leias and one pretty little mermaid. Why not?

So this get-up will get another airing for Halloween, however I might redesign the buns a bit, since they kept tumbling off her head during Jedi training. Nothing worse than your buns tumbling off when you're in the middle of something important.

So for the crafties and wannabe-crafties here's a bit more (but not much) explanation of how I got to the finished product. 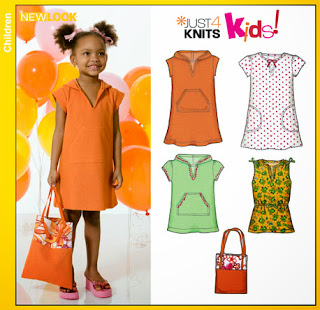 Basically this Leia outfit is a longer version of the hooded beach dress above with long sleeves and a deeper hood.

I wish I could tell you where to buy this
little gem of a pattern, but it's been discontinued. I took the short sleeve pattern and extended it into long bell sleeves. If you are interested in cutting or modifying your own patterns and you haven't a clue MADE is an excellent website with tutorials.

I'll explain a bit about the 'Hair-Do' since it doesn't involve sewing, and you never know when you want to do this with yours or someone else's hair.

I used a hairband, two take-out box lids (cut into doughnut shapes - using a coffee mug and Berocca tube for stencils).  Two cheap long hair pieces secured at each end with elastic bands, which I twisted around and through the centre of the doughnut shape.
When they looked about right (and it took a couple of tries) I stapled them in place to the plastic, before sewing/ gluing them onto the hairband. Hairbands with teeth are essential so the buns don't just slide off the ends.
As I mentioned above this does need tweaking because the buns are so heavy it's not very secure. I'll likely buy another light weight hair band and sew it on so it sits at an angle (30 degrees ?) to the other, further on the back of the head.

I'm sure you'll appreciate the multitude of reasons I didn't attempt this version of Princess Leia.

Here's some more spaced out reading you might enjoy:

Email ThisBlogThis!Share to TwitterShare to FacebookShare to Pinterest
Labels: 2001 A head Space Odyssey, home-made-princess Leia costume, Jedi training, Jeffrey Brown, MADE, the dark side of the force, Vader's Little Princess