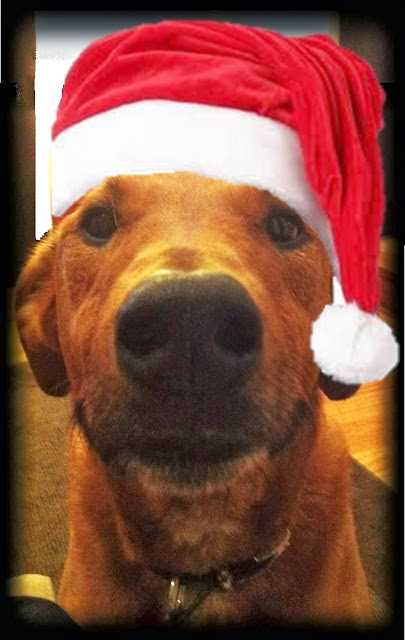 Our Orange Dog has given us ample opportunity over the years to suspect that he's not the sharpest knife in the drawer. This week I've had a rethink on that one..

Every night I wrap a few more presents and put them under the tree. Santa will surely come too after receiving She-Who-Worships-Pink's letter, but we like to give each other presents because Christmas is about giving too.

Except if you're a dog.

Every morning The Orange Dog sniffs the new parcels under the tree, the large ones get a more enthusiastic going over. He comes to me immediately after with the most tragic expression.

Our Orange Dog understands about 'presents' and he can smell which ones aren't his.

When my nieces and nephews were small we used to make movies of Buddy collecting and opening his presents. They thought it was hilarious.

He would pluck them out from the pile by their string, take them to his bed, unwrap them, then parade around the living room, tail and head held high in a lap of honour- his gift in his mouth for all to see.

Well the other morning he came out from his under-tree investigations, covered in strips of red tinsel wearing his most serious heart-break-face. I caved and promised him there would be parcels for him tomorrow and I added his gift wrapping to my 'to do' list.

The next morning, as promised, there were carefully wrapped chew toys and treats under the tree.

He came, he saw, he sniffed and the tail started to swing. He reached out and grabbed the closest one and I told him; 'NO. You must WAIT'. If his expression came with subtitles they would be along the lines of; 'you gotta be kidding?'

He waited all right. Until we were sat down in the other room having breakfast. Then we heard the sound of tearing paper.

He had removed his three parcels from various points under the tree, pulled them aside and started unwrapping the first one.

So I conclude: he's not the dumb dog he makes out to be. In fact I suspect he's smart enough to play dumb when it works to his advantage. Which is often.

His Christmas presents are now hanging out on a high shelf till Christmas day. Naturally he hasn't touched anyone else's.

Not so dumb our Orang Dog.

Happy and safe Christmas everyone