Translation: I miss my dog. Has it been only 4 weeks? Really?

Now if you're not a dog lover you'd better tune out now, 'cos this post is dedicated to my buddy, Buddy.

In this ever-so canine inclusive environment watching those swim-suit clad dachshunds, and greedy little terriers with their restaurant platters piled with entrecôte, even when I step in dog-poo ( which in France is unavoidable) I just get this overwhelming desire to bear-hug my pup a l'orange.
You see, to steal a line from Jerry Maquire, he is " my ambassador of quaan".

The orange fur-person, who held all of the little pieces of me together for the tougher post-miscarriage months. My fuzzy, licky, nudger. He thought I'd died, I'm sure, when I didn't come back from an unscheduled hospital visit, turns out, with pre-eclampsia. He'd spent the week prior with his head glued to the back of my legs, only removing himself to sniff the toilet after I used it - he knew something was wrong.

So tonight four weeks into our family holiday, showing my French nieces some photos of Lucie decorating him and film of them playing together in the park back home, it hit me with a wallop. I miss my nagging, soulful, needy, greedy, neurotic, emotional sponge of a mutt so bad it's like a stitch in my side.


When I think back of all the articles & pregnancy books I read that advised dog owners to distance themselves from their pets prior to the birth. (This is to avoid jealousy and any resultant negative and potentially dangerous behavior towards the new bundle of joy, from the four legged bundle of joy).
I was constantly tactfully reminded of this during my pregnancy, while sprawled on the rug with Buddy alternating between tummy rubs, ear tickles & bear hugs. My answer for nine months was "I know...I'll stop cuddling him so much, um, starting tomorrow.."

As it turned out, I never stopped cuddling him so much. 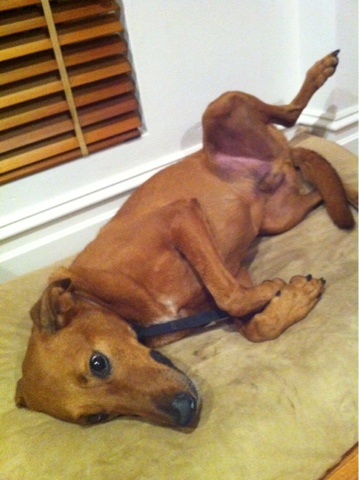 The 'experts' also advised taking items of soiled baby clothing home from the hospital to "get the pet used to the new baby smells" Buddy was not remotely interested, his first whiff of my hospital clothing however sent him into a frenzy. I was alive after-all.
And when he saw me, baby or no, it was business as usual.

He's been fabulous, we knew he loved kids from the way he behaved with our friends little grommets. But the time he took on an enormous male bull mastiff on our account I was truly impressed. Bud, (Doberman crossed with a smaller orange mutt) is 29 kilos of lean muscle, but this thing had at least another 20 kilos on him and it was running at me (with Lucie strapped to my chest in the baby bjorn) like a freight train. Bud had been mid-pee on a bush about 50 meters away when he saw this thing coming at us. He took off like an olympic sprinter out of the block angled across this monsters trajectory and hit it full pelt in the flank knocking it off its feet.

He was our hero. Even though it turned out the thing was an overgrown pup, just 2 years old, more interested in the ball thrower balanced on my shoulder than anything else in the park. I was still mighty relieved he didnt get to jump up on me and my teeny tiny passenger.

Buddy used the same technique a week later to rescue a female Doberman puppy who was being mauled by a big mongrel. We were about to get into the car after a long walk when suddenly there was this terrible shrieking and yelping. Bud flew across two rugby fields to hit the savage dog, like a torpedo, in the shoulder. The mongrel staggered to it's feet and took off in fright while Buddy stood nudging and licking the puppy's neck where she'd been chewed.

Other heroics include removing his best friend Aldo (a feisty Jack Russell) from the jaws of an insane Staffordshire Bull Terrier. That was one of the two times I've actually seen him really fight.
And breaking up several pack fights, just by waltzing into the fray & giving the combatants a meaningful look. Each time the dogs disperse I wonder what it is he says or does in dog-speak that makes 'em quit & head home.
He does the same when I Lucie & I have a bust-up; as soon as the shouting reaches a certain pitch, in comes the orange peacemaker, shoving between us giving us both that 'meaningful' look...
Except I have no idea what it means.

So yeah, he's a needy, greedy, frizz-bee obsessed, cuddle-mugging, licky nudger and a colossal emotional sponge but he's also my zen-master and I miss him to pieces. 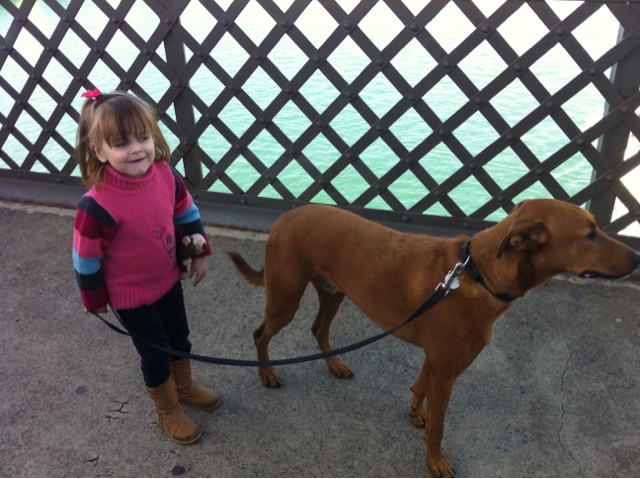