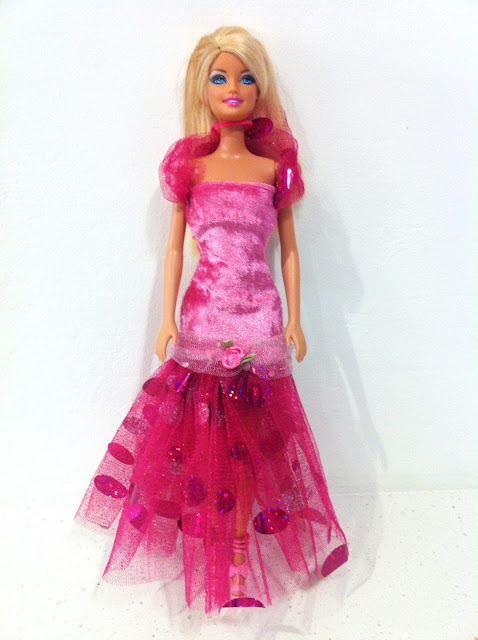 For the last few weekends I've been dragged out of bed at some hideous hour, because someone in the toy cupboard; "doesn't have a THING to wear"

So I spend a couple of hours designing tiny couture out of scraps of  fabric left over from various costumes I've made before. The smiles I get make it so worthwhile and, as a former designer of real peoples fashion, it's actually kind of fun.

I don't have any patterns so these are basic designs (and I use that term loosely) where I rely heavily on stretch fabrics for the body and let the tulle, lace and trims do the rest.

This one above is a basic hour-glass shaped tube. I measured the length I needed (to cover Barbie's dignity) and added a centimeter (or 1/4") at the top to allow for hemming. I measured the dolls waist and drew onto the fabric the overall shape starting with a tube and nipping it in at around the middle to form the waist.

I sewed up both sides using a stretch stitch then folded over the top edge and because I used stretch velvet which notoriously rolls on raw edges, I pinned and hemmed it by hand.

I used a wide strip of netting - about 80cms (just over 31" ) long and gathered that on one long edge before sewing it (using stretch stitch) to the velvet tube's bottom raw edge.

To make the shawl collar, I used another strip, about 5cms (roughly 2") wide measured around the doll's shoulders to get the length. This I gathered by hand, at each short end, and hand stitched it to the bodice on the side seam at the top of the tube.

All the other trims I sewed by hand and I really just made it up as I went along using whatever I had at hand that looked pretty.

Below is another version of the same idea.  With this skirt I cut the length of netting longer and twice as wide, and folded it in half along the long edge before gathering it. This made the skirt fuller but a tad harder to sew onto the Lycra top.  The straps were cut from the selvedge edge and stitched on by hand.

I fell in love with this Dora doll, but she came dressed in a football outfit and I felt she was just too pretty for a sport uniform. 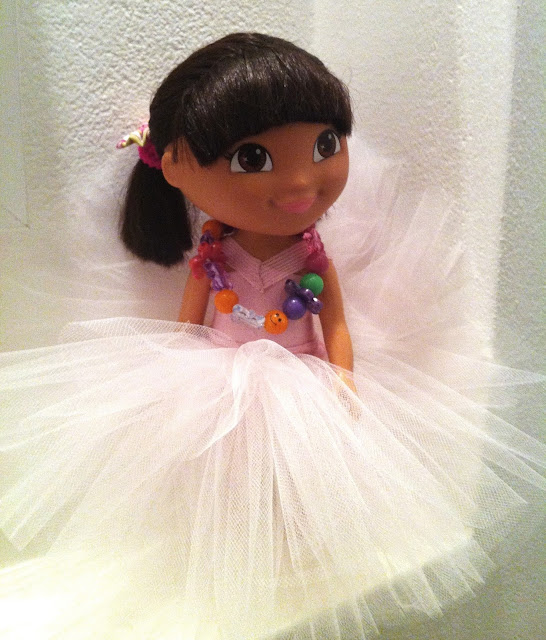 These two Ballerina's wanted to be Princesses according to She-Who-Worships-Pink. So I took an hour out of my weekend  to make basic elastic-waist skirts to slip under their tutus - problem solved. 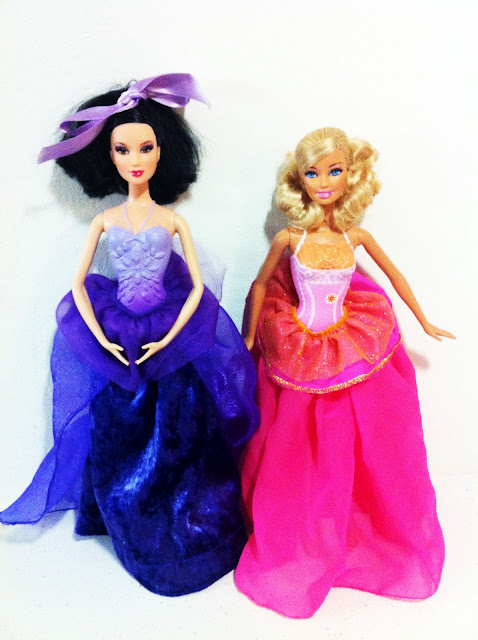 I miss designing fashion, but not the hassles of running the wholesale and retail side of the business, and spending days on end developing and cutting patterns.

This little hobby is giving me a quick fix that's creative without eating up entire days like other creative sewing projects can.

And like I said the smiles I get are such a bonus.