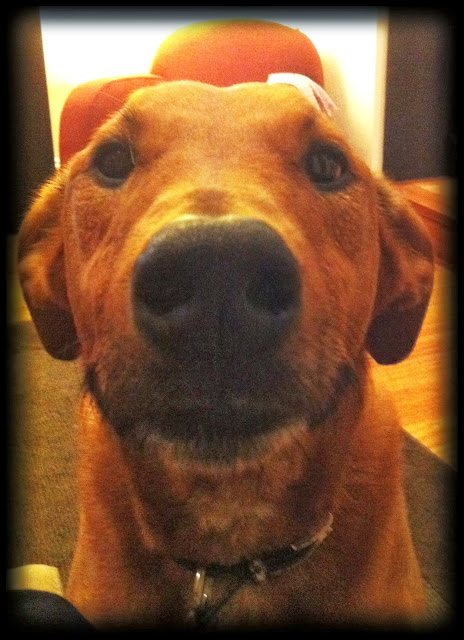 Poor Buddy has been in the wars lately.

First there was the football in the eyeball debacle, then the Totem-Tennis racquet in the face incident and then some idiot drunk goes and breaks a beer bottle against his favourite tree to pee on.

He needed several stitches in his back paw AND it neeed to be bandaged and kept dry, clean and un-licked for ten days.

But as they say, necessity is the mother of invention and being a keen up-cycler of my child's socks, I came up with yet another puppet-sock rescue..or should I say puppy-sock rescue :0) 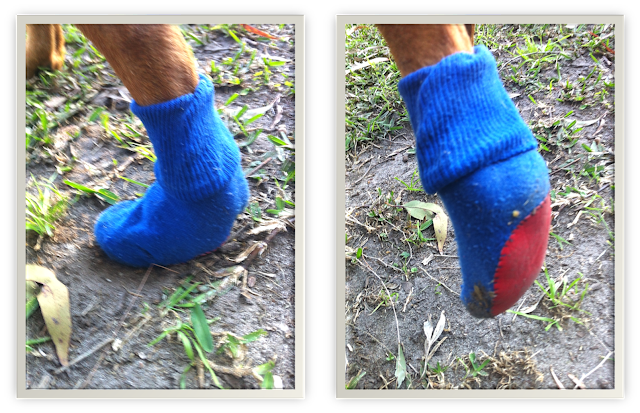 The vet suggested I buy some of these at the local pet store; but I was warned, "..theyre not that cheap."

But why would I do that when I have a drawer full of toddler socks and an attic full of scrap fabric including several colorful vinyls?

So I sewed a vinyl patch onto the bottom of several socks which saw him through his recovery.  As the vet promised; they kept the bandages on, kept the wound clean and dry and prevented him from licking the thing to death.  Besides all those endless hours of licking can keep a person up at night, not just a dog.


If he is already a minor celebrity in Kindlyland, this made him an even bigger hit than usual during the school run. Most of the kids thought he was 'soooo cuuuute' with his little sock and he got lots of sympathy cuddles.

But just when I was about to up-cycle a set of these Tippy Toes, 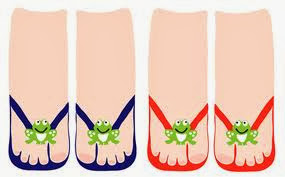 ..his paw went and healed.

Bit of a shame in a way.