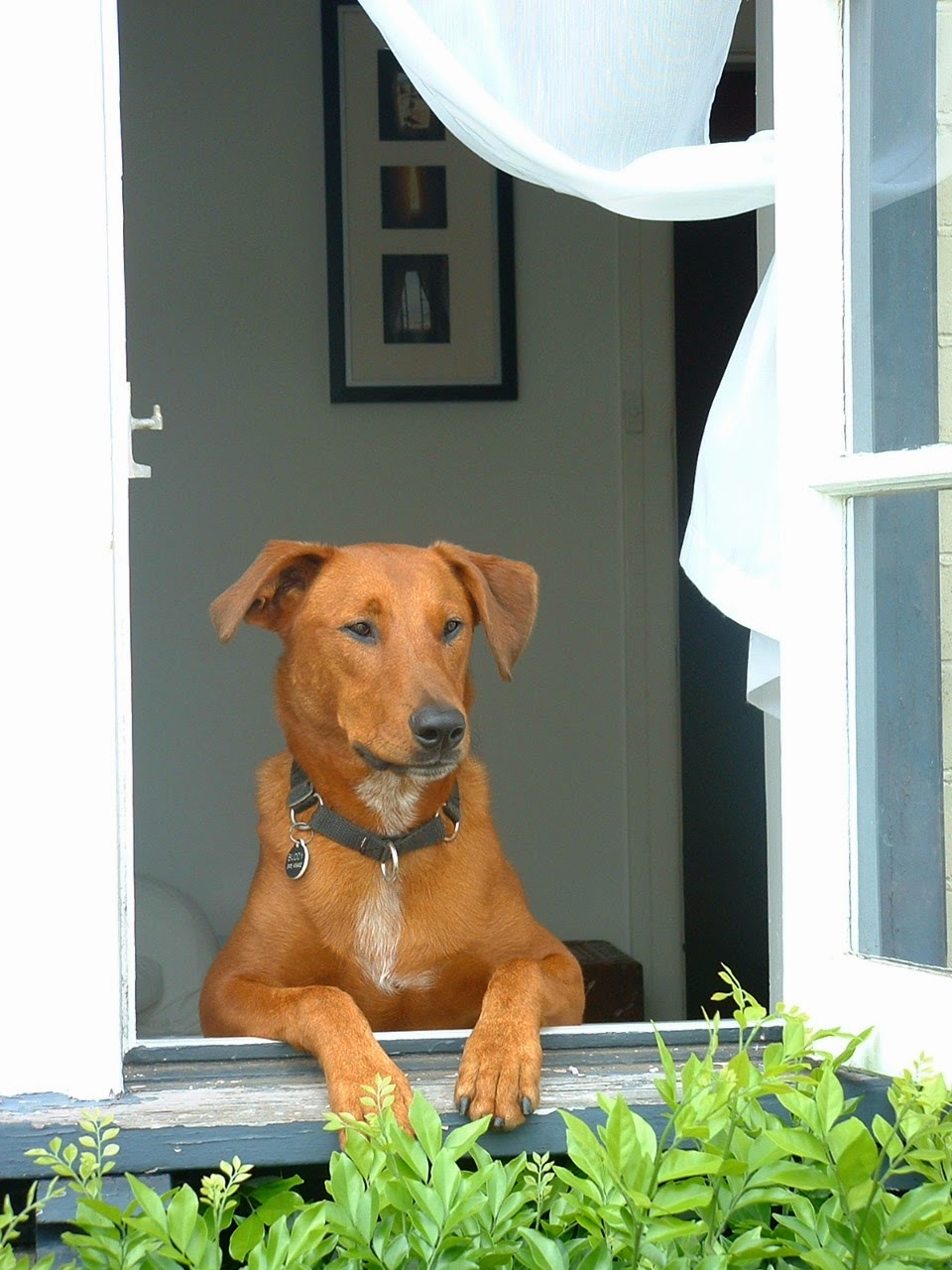 How many dogs do you know could be left locked in the house with an open 10 kilo bag of dog biscuits?
The usual scenario: dog is prostrate with a seriously swollen stomach, there's vomit stains on the carpet and a tipped over bag with what's left of the biscuits scattered around the floor.

I didn't even think about the huge bag I left out with every intention of packing it away later. Or that it was so heavy I broke the re-sealable top carrying it to the car.  I just propped it up against the wall behind the dining table, a meter from Buddy's bed, open and inviting. No consideration to the temptation of an underweight animal who's just had painfully abscessed teeth removed, and is once again eager to chew.

I fed Bud tonight while She-Who-Worships-Pink-and-now-also-Blue was in the bath.
After his meal he wandered over to said bag, gave me a pointed look, nudged the bag with his big black golf ball nose and looked at me again. I shook my head and I swear he shrugged before he went to lay on his bed. Then it hit me. I have actually left a giant bag of food next to him all day and he not only hasn't touched it but, he asked nicely if he could have a bit more after dinner.

I was shocked and I told Pinkster what normal dogs do when left alone with unattended food. She reveled in his awesomeness to the point where he got to eat most of her ham, some of her noodles and half a packet of liver treats. Maybe this is his strategy.
After all, he is a combination of two highly intelligent breeds...

Buddy's mother was a red Australian Stumpy Tail Cattle dog "..a brave, loyal, physically strong and highly intelligent dog. He possesses a  rugged nobility, but is equally the ‘Aussie larrikin’ with a terrific sense of humour. He asks for activity, affection and lifelong commitment and will repay these tenfold throughout his life."

Buddy's father was a breed with an undeserved bad rap: Doberman Pincer:
"Dobes like to be with their people and are not suited to kennel or backyard life; they need human interaction and leadership. Loyal, tolerant, dedicated and affectionate with the family."

So as much as he stakes a claim every now and again on a piece of furniture, I'm reminded today that this is an unusually honest dog.

Why should I be surprised about today though, when at 12 months old he was left alone with an accessible platter of prosciutto (on the coffee table) which was also untouched an hour later.  In the nine years we have enjoyed his company we have not had one sock or croc chewed, never lost a sausage from the barbeque.

With a baby in the house since he was going on three-years-old not one toy of hers was stolen or chewed; on the contrary, she's still repossessing his more interesting chew toys.

So today after peeling the children off him at the school run  to come home to this reminder of what an unusually noble and honest animal he is - I've decided to dedicate another post to him.  Buddy deserves celebrating.

My lovely friend, and remarkable, award winning author Jaclyn Moriarty also had a bit to say about our lovely Bud on Inside a Dog.

Jacklyn also deserves celebrating for her talent and her inspiration and her general loveliness. One of her recent blog posts inspired me to walk Bud across the harbour bridge this week which he was very pleased about - it's been three years. As expected, he wasn't keen at all on the ferry ride home despite the lovely American tourists who cuddled him silly. :0)

But I need to say here; my God, Jaclyn Moriarty can write! This weekend I'm going loose myself in her latest book "The Cracks In The Kingdom" the second part of' The Colours of Madeleine Trilogy'.

Have a great weekend and may it be filled with great books and a plethora of puppy cuddles.