Have you ever tried to get a particularly squirmy six-year-old to hold absolutely still for forty minutes? I know. What WAS I thinking?

I really thought, this Halloween, that I’d had a reprieve from the usual design,  pattern cutting and sewing deadlines.  Pinkster’s new Monster High obsession led her to imagining herself as Frankie Stein and a lucky pit stop on the way to the Fabric store scored me a readymade Frankie Stein dress that cost less than the materials would have.

I was well pleased with myself until the art director asked how she would make her skin green? She has high demands of authenticity this one.

I looked at her skin, barely recovering from another bout of eczema and I told her there was no way I was putting green paint all over her arms and legs.

So Sewing reprieve over, I needed to make my first pair of panty hose and a matching tee-shirt.  It wasn’t so bad, I cut a longer leggings pattern, so they would go over her feet, and shaped and tacked them before altering them to have a heel in them and they almost extended to her toes. I used a very sheer stretch dance fabric – luckily in  the exact colour I needed.
Similarly, with the shirt I cut the sleeves long so they extended over the backs of her hands and put a few stitches in each to make a tunnel for her thumb, keeping the sleeves stretched long and covering a good part of her hand.

But by far THE HARDEST PART was putting these on her to fabric paint the stitches on her new green legs and arms.
Hard enough to paint fine lines on  stretch fabric but when you have a ticklish six year old to contend with well this was tough.

We both had a fit of giggles when I’d run the bath and had to peel  off the nylons, stuck to her skin with paint. She went into the bath with black stitches painted on her skin, but fortunately it washed off her whereas it stayed put on the Fabric.

The neck Bolts became my next challenge. All the stores had ‘just sold out’ of Frankenstein neck bolts!  I went to a discount store and bought a boys building play set. I had to buy two actually because each set only had one plastic nut & bolt, but at only $3 each didn’t exactly break the bank. We were also very close to the 31st so I didn’t fancy trying to make some from modelling clay.  I made a choker for Pinksters neck, painted the obligatory stitches on that then make little holes and screwed the plastic bolts through.

Without going into too much detail over the finishing touches this was the result. 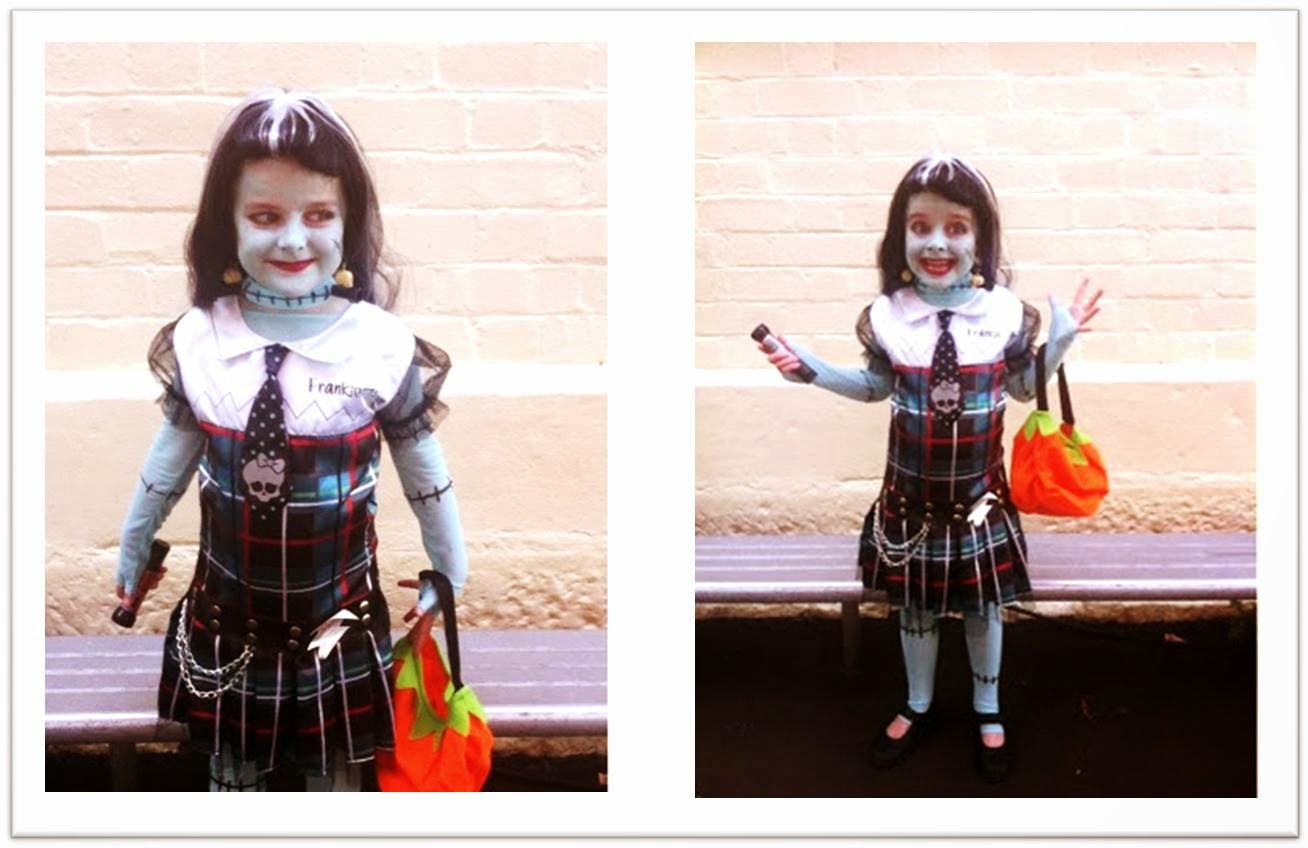 My pretty little girl was completely unrecognisable. Just ask her Pre-school friend who got a hug on the trail and froze in shock.

My Frankie also had her heart set on a mini Halloween party, so I had to organise cut-outs and craft supplies for ‘build a bat’. Also a spider web with several teeny tiny spiders for a game ‘Pin the Spider on the Web’.

Halloween week I had a very important writing deadline which I managed to meet by the 28th October. (more on that later) so I had a whole three days to suit her up, decorate the house and prepare for the party and the trick or treaters – who were still arriving after my Frankie had been tucked into bed!

It took me over a week of doing not much, to recover. 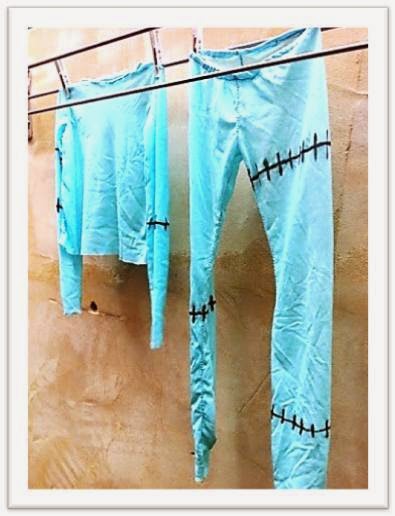 As it turns out my custom hosery is wash-and-wear; with the stitches still intact. yay!