WHO WANTS TO RIDE ON A HOBBY-HORSE WHEN YOU CAN RIDE A GIRAFFE? 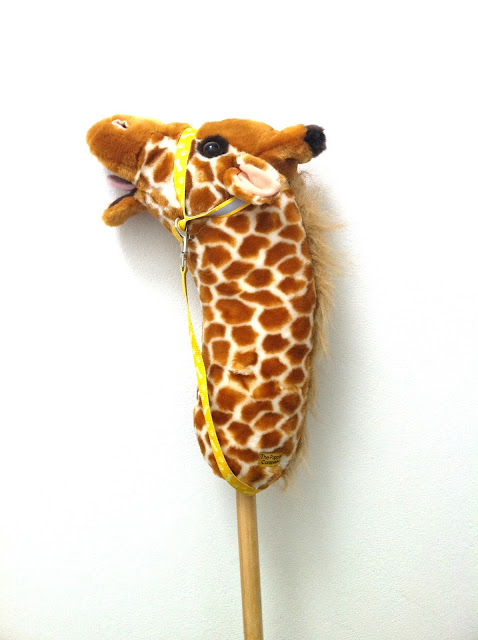 She-Who-Worships-Pink had been galloping around the house with a broom calling giddy-up for weeks and though I’d seen various hobby horses in the toy stores at very reasonable prices, nothing really inspired me. Until I came upon this feller.

Now I have to warn you this is an easy project but it’s not a money saver if you do what I did and buy a beautiful big glove puppet imported from
The Puppet Company in the UK.

In saying that, Uncle Pete's stores have them at around $25 so with the cost of a broom handle thrown in – it will cost about the same as your run-of-the-mill-boring-everyone’s-got-the-same-retail hobby-horse.

OK so here's what do you need:

Tools:
What else:
Materials:

Step 1 – cut your broom handle down to a comfortable length for your small-person to ride on. Then cut another small piece of the left over no more than 4cms long.

Step 2 - using your gimlet, make a screw hole sideways through the smaller piece, then another hole in the top of the sawn end of the cut down broom handle. (fig. 3) Depending on how hard the timber is you may find the gimlet isn’t enough and you have to resort to the big brother drill.

Step 3 - screw the smaller piece of wood to the broom handle to make a T-bar (fig.4 ) – once the puppet is stuffed, this will act as a stopper so that the broom handle can’t easily be pulled out of the puppet and used as a weapon on smaller siblings or family pets.

Step 4 – firmly stuff the puppet head around the mussel, ears and head leaving room for the T-bar. Then push the T-bar into the head till it reaches the highest point of the head and pack stuffing firmly around that too. Pay particular attention to pack a good amount of stuffing around the back of the head behind the T-bar so that the head is well balanced on the broom handle.

Step 5 - Keep packing stuffing into the puppet turning it regularly so that it’s evenly around the broom handle. Do this until the puppet is firm and there is only about 3cms remaining till the bottom hem.

Step 6- cut a piece of the cushion outer fabric about the size of a mans handkerchief (fig. 5) and make a small hole in the centre. Push this onto the broom handle, and work it up the handle until it reaches the puppet hem. (fig. 6)Tuck this inside the puppet making sure all the stuffing is captured by the fabric.

Step 7. finishing: You need good strong thread here or to use four threads together like I have her (fig. 7). Use the thread to tack inside the hem creating a drawstring effect. 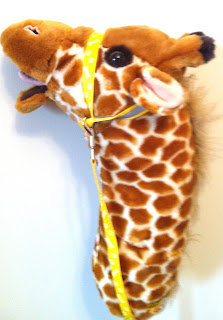 Leaving about 4 cms of thread outside at the start, push the needle through inside the hem as far as you can, (fig. 8,9) then outside and back into the hem. Continue along until you get full circle. Take the two ends of thread and pull tight before tying off
(fig 10). Then stitch the ends into the hem and cut off the excess.

As I mentioned, the beautiful giraffe I used was a ‘long-sleeved glove puppet’ from The Puppet Company. I swear looking at their range, i'm tempted to make another, you know, just for guests ;0) If I had a boy I would make him a hobby-Rhino.


You can buy these and many, many more gorgeous animals on line.:

puppetsbypost.com or directly from the link above they both deliver world wide.  Or get to your nearest Uncle Pete’s store and save a bundle on shipping.  I must say it was a real toss-up between the giraffe and the elephant I have to tell you. I may have to make another, you know, for guests...
at 6:51 PM