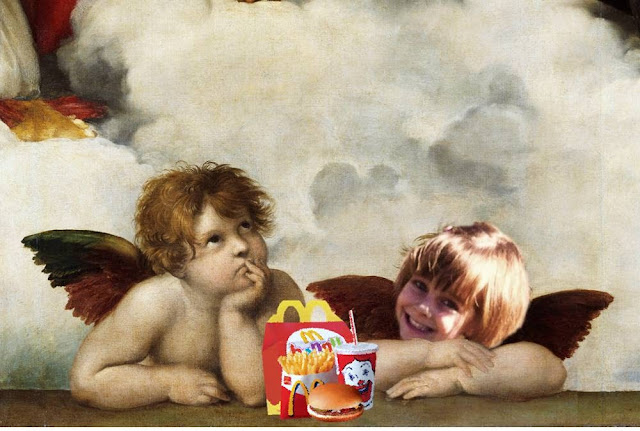 Just when you think you've got a handle on this kid wrangling gig, along come the school holiday play-dates. That's where we sort  the green-horns from the lambs for slaughter..

In a fantastically (fanatically?) motivated and happy state of mind, that came from nowhere considering the awful night’s sleep I’d had, I decided to offer to take The little Pinkster’s friend Borrowed-Child for a playdate after Tennis-camp.


While they were ensconced in adult supervision, I flew off to pick up some groceries and run a few errands.  On the way home I started to fret because it is a well known fact that I am culinarily challenged and that Borrowed-Child is a VERY fussy eater. He has told on more than one occasion; "I don’t like that, I want something else."


I exhausted myself trying to run several errands in 90 minutes with sleep deprivation beginning to kick in. So my thinking was along these lines; do I really want to go home and start trying to find something to feed them he will eat, or do I drive through for some Happy Meals as a treat? No brainer huh?


Ominous music began playing in the background as we worked through the queue to the drive-through window.


I was incredulous; “You know MacDonalds' right?"


My Pinkster piped up: "I want a hamburger with NO pickles pleeease," by this stage she's bouncing  with delight in her booster seat.
As we ooze into the tunnel lit up with glowing menus, Borrowed Child asks many questions - It's like he's never been to MacDonald’s before.
Then it dawns on me HE'S NEVER BEEN TO MACDONALDS' BEFORE!!!!
And there can only be one reason for a 6-year-old having never EVER been to MacDonald’s.


O-oh.
I am a BAD child minder - have just sabotaged someone else's good parenting.
Too late now.


Biting my nails, I ask Borrowed-Child what he'd like to drink. Pinkster only likes water (never could stand apple juice) and even I wouldn't give them Coke.


After a long "ahhhhhhmmm" Borrowed-Child opts for the juice and I pay at the first window before we start moving again.


Borrowed-Child asks, "where are we going now?"


"To the next window to pick up our lunch"


"Well," I say, "because it's a special lunch box for kids with a toy inside"


(Ominous music playing away in my head just gets louder)


In the rear view mirror I see his stunned expression;


As soon as the food starts being passed through the window, Borrowed-Child is jumping in his seat chanting, "I want my toy, I want my toy, hurry up, hurry up"


We are jammed with five other cars from Macker’s two exit lanes trying to make it onto the highway to immediately cross a bus lane and two other lanes of speeding traffic into the turning ahead that I need to take for home. All of this achieved, hopefully without being cleaned up by the oncoming traffic.

The 'hurry up - I want my toy' chant coming from the back seat is relentless and loud. My brain feels French-fried as I try to avoid us being obliterated by an articulated bus hurtling in our direction.


At the next traffic light I peep into the first box and see Pink's burger, so I pass the kids their respective lunchboxes, and Pinkster passes her little bag forward for me to open. It's a Despicable Me2 minion and she's delighted. Phew. Sometimes they do crap stuff like hairbrushes and cardboard puzzles as you know.


Borrowed-Child complains; "I got the wrong toy, this isn’t a good one, I want a minion".

It's looks like a fighting nija-dinosaur thing, obviously a left-over from a previous campaign, and I silently curse the Mackers people who, though asked, didn’t give me the same toy in both meals.


Sitting at the next traffic light I point out the button moves its arm up and down and the other marvelous features (it has a weapon!) as opposed to the very boring static minion. He's not having any of it and the moaning and complaining continues from Borrowed-Child as we snake our way through the traffic.


Then the cunning kicks in and our borrowed friend gets all Machiavellian, in various attempts to trick, coerce and guilt-trip, my little girl into giving up her bit of plastic joy.


I’m tired, I’m cranky and  my growing pissed-offedness begins to come out of my mouth (where's my thank you for the Happy Meal  here?) But he's a very bright boy - he knows just how far to push and just when to quit - I'll give him that.


At home I set the kids up at the table and give them their drinks.


Borrowed-Child says "I don’t want the apple juice, Pinkster wanted that. The water is for me."


Sighing, I give them both water. In identical cups.


I realise now, this was soooo not a good day for me to look after someone else's kid. But just when you think all is lost, they head off to her room and play nicely and neatly with her Leggo; for two whole hours during which, I managed a little nanna-nap. So maybe all that fussing was just a case of the ‘Hangrys’?

The next child we borrow, became, (as child's parent was considerably, unavoidably, delayed) a play date turned into long-day-care.

I felt every minute of the endless squabbling over; glue sticks versus the pot of Clag, Real-Life baby doll versus Ugly Baby doll (whose cry sounds like a blocked drain). The latter being the most desirable for some odd reason.
They fought tooth and nail over who would have the pink stroller and who would get the less than fabulous identical, (except red), stroller. (NO people, DO NOT imagine for a minute that having two of everything will keep you out of trouble - every item must be IDENTICAL in every way!).

My girl was cranky and intolerant and Borrowed Child was high maintenance with an activity changing, two- minute attention span. And definitely of the opinion that I was the play-date partner rather than my child. As I said, it was a loooong day.

But  just when I tell myself "NEVER AGAIN!', we do have another little friend over and the girls and their Barbie dolls stay in Pinkster's bedroom for three hours without a peep. Go figure.

You know, I can't help but wonder, if there's a way I can somehow conduct interviews for play-date partners.
"OK Kid, let's see your CV," And they would hand me a report card with photo's of tidy bedrooms, toys in good condition, and a long list of foods eaten without fussing.

Sounds extreme I know, but dealing with kids who seemed more mild-mannered than Clark Kent himself, turning into petulant little Dictators and our Pinkster drowning in tears is seriously un-fun. As are toys broken for the sheer entertainment value, there's bullying and bedrooms are trashed almost beyond repair..

And feeding time.. well. I never get that one right:
Kids who wont eat a thing, all day long, because it wasn't made by 'their mama' (not even fruit).  Ravenous visitors pacing in the kitchen asking if the Macaroni cheese is ready yet (every 30 seconds) only to have it pushed away after two whole bites. I know I'm no Gordon Ramsay - but even I can't balls-up melting grated cheese over macaroni.

This borrowing of other peoples' children thing takes guts, and stamina, and I am riddled with guilt just admitting to my discomfort and my failures.

I just hope that She-Who-Worship's-Pink is well behaved when she's in other peoples custody...but you never really know do you?
at 8:23 PM