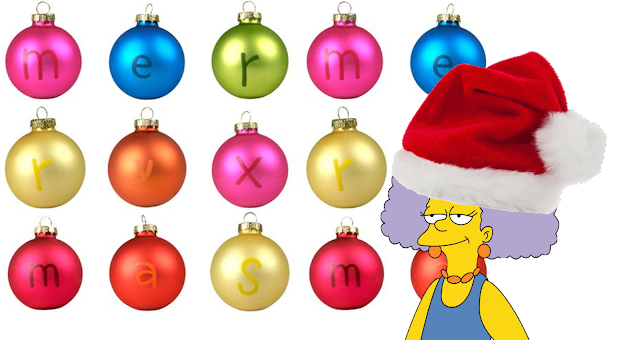 It's started already; playing ruthless games of catch-up, eating out of bags passed from drive-through windows while stuck in traffic and calling it mealtime. I'm also driving around with a takeaway cup in my car cup-holder so I can take a chug of Lemsip Multi-Relief at each traffic light.

It's the Christmas rush and it's only bloody November.

I was reading an old post from around Christmas last year and man was I stressed. Well what's changed?

I don't have all the twelve apostles (teachers) to buy for, we are down to one, so that's something. Don't get me wrong, self confessed gift-a-holic here. I love gift giving, adore it..it's the driving, mall parking and finding bit that sends me into a sweaty tail-spin.

But it does seem that our girl is not the only one with a birthday in December. Pretty much ALL of her school friends seem to as well.

To make matters worse for my shopping (and ongoing bathroom renovations) schedule, I have been bed ridden for days. Turns out I have Strep Throat, which would explain why I've sounded like Sly Stallone for four days in between squeaking like a Japanese Cartoon character.

Meanwhile I have a bathroom with no shower screen, a working bath but you need levitation skills to use it because the floor's not finished; "Just try not to walk on it as much as possible and don't get any water on it yet.." Has this man ever bathed a five-year-old?   The vanity can't be completed till mid January but we can live with that so long as nobody takes out the old ugly one.

So here I am  with the hairdresser (for the first time in six months) having my hair chemically relaxed. After a week of torrential rain (and tornadoes no less), the temperatures and humidity have shot right up and my hair looks like Marge Simpson's sister Selma. Unless I'm prepared to hit it with a straitening iron five times a day - like I have time for that! However my frizz goes nicely with my voice, now I think about it, because I sound like Selma too.

Having just 20 minutes left on the parking meter, it dawns on me that I should be at my doctors appointment in fifteen minutes, and my hair is still doused and dripping with smelly chemicals (kinda like the bathroom; totally the same smell). I'm wishing on my life that I could be chemically relaxed in a way that would, similarly, not wear off for another six months.

I get altogether too twitchy to focus on the  gossip magazines' discussion of Miley Sirus's Twerking and tongue action for another second. But miraculously, I'm out of that chair in ten minutes, across the road into the Doctor's office and out again in seven minutes flat!

Waiting for the lights at the crossing takes longer and I'm still stressed out because the car park is expiring as I do an impatient little dance, repeatedly tapping on the 'cross' button. I've read somewhere (stupid gossip magazine probably) that if you press them a lot they get annoyed and change the lights faster.. or was that for elevator call buttons?

I'm thinking of how the local council employ highly motivated human blood hounds to monitor the parking meters, they can literally smell an expired meter.  Did you know that stressful situations can lead to gross exaggeration and over-generalization? That could be more gossip magazine wisdom. I need to step away from the crap magazines - 90 minutes with nothing else to read and my brain's farting like a dog after a bowl of baked beans.

Anyway I used the pharmacy as a short cut, jogging through, tossing my prescription over the desk puffing;  "sorry. Parking meter. Back in a sec.." continuing through the back door past a knowing, nodding  pharmacist.  My car was parked opposite their back door with no ticket. Phew

When did my days get divided up into these minute increments?

Right after moving my car I charge back into the Pharmacy, then make a hit and run grocery shop, followed by a side trip home to load up the refrigerator and stack and start the dishwasher.

I posted two gifts earlier, neither of them for Christmas. The sky is looking ugly again so I've emptied the washing line but not the basket, and I still have to go out and find a gift for this weekends birthday party.

Oh and walk the Orange dog before the school run.

This is why my day is divided into minute increments.

As much as I love the end result, it's the means I struggle with, and that's what makes me really not keen on this time of year.