Little Girls Can Be Mean 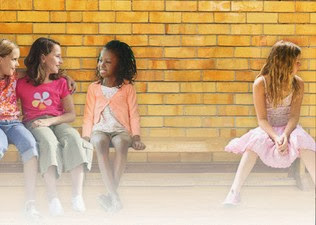 For all my parental moaning, and there's a lot of that here, I have to give her credit, She-Who-Worships-Pink is a 'Nice little girl'. But she wears her heart on her sleeve.

She's kind and engaging, she worries about other people's, other kids', animals and even insects' feelings.
A kind of sweet observation which appeared on her pre-school Development and Learning report: "[Pinkster] will often go out of her way to include younger less and confident children in activities, and will offer comfort to others when they are upset."

This is a trait in her that we're particularly proud of but there's a down side. She  just doesn't 'get', or deal well with, the kids who aren't 'nice' back. Starting school has been tough on her emotional resilience. She's been thrown into a large group of kids she doesn't know well and not all of them display behaviour that is 'nice'. Some of the behaviour is a far cry from 'nice'.

We recently ran into a kid from her school on a weekend. A kid who used to run across a room to give Pinkster bear hugs. My girl ran across a park to hug her back. This other child stood there rigid with the most awful expression on her face. Disdain? Mortification? Abject horror? (Somewhere along those lines.) Needless to say she didn't hug back and Pinkster released her looking confused. Our child's numerous attempts to engage the Go-Away-Girl in a friendly manner where just painful to watch. And the reactions of Go-Away-Girl, who when she spoke, her comments were rude and borderline cruel.

Later on, we had an emotional, ill-tempered little girl on our hands who didn't want to play with her toys, the iPad or do anything much at all. We asked her if she was being cranky because she was feeling bad about something and she told us straight; Her friend didn't like her anymore and Pinkster was worried that she wasn't fun and that means none of the kids will be friends with her anymore and she will be all alone forever.. 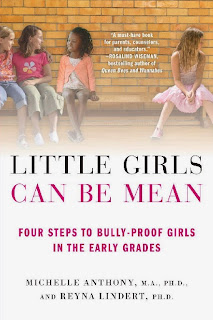 A dear friend of mine (one who returns my bear-hugs) recommended this book Little Girls Can Be Mean a while back and although I still haven't finished it, I picked up some handy advice.

We sat down with the Pinkster and told her that we were very proud that she'd been so nice to Go-Away-Girl and that she'd tried so hard to play with her and share her toys and fun games. We pointed out that Go-Away-Girl wasn't playing with any other children at the park so Pinkster shouldn't blame herself for not being enough fun.

We told her that to be kind and nice and thoughtful, like she is, is the most important thing and it always makes us proud.  I told her; "Kind girls like you wont always keep the same friends, but you will always have lots of friends because you're so nice to everyone."
We added what a shame it is that Go-Away-Girl maybe doesn't know how and if doesn't learn, then she'll end up with no friends at all.

Pinkster got up, scooping up her two favourite Barbie dolls and said, "Well, that's her problem!"

We've had a lot of  "She/he doesn't want to be my friend anymores over the last couple of years and I find myself asking the question; if it's a choice - do I want her to be bullied or the bully?

Neither is the short answer.

But I guess if, as the book says, you encourage regular open discussions on this stuff then you can avoid the serious bullying and help your child build up some emotional resilience and confidence in their own social skills, while still nurturing the niceness and empathy.

If I found it a bit meandering in it's style, I think this is a very useful book for any parent raising girls. I love that my little girl is such a sensitive soul, but I'd hate for it to have an adverse impact on her and it's nice to have some informed advice and strategies in place.

So I'm giving it a plug at a time when its been most relevant for our family.

By the way this is NOT a sponsored post. Like all of my recommendations on this blog - I only recommend stuff that I've found to be good (because I like to share) and nobody pays me to do it. (worst luck)

There are other books on the subject I haven't read but would be interested in down the track..(when I've finished this one)

Rachel Simmons,
Odd Girl Out
The Curse of the Good Girl