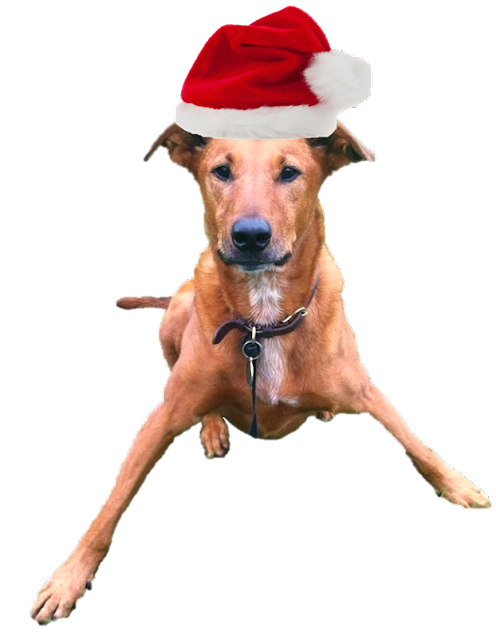 I'm looking through the rear view mirror at a large dog flying around in the back of the car and I have an epiphany of sorts.

Driving around with the dog being tossed around in back doesn't constitute exercise for said animal. Well maybe a little, considering the muscles he must flex, and keep flexing, to stay upright as I hurtle like a crazy person through roads jammed with pre-Christmas traffic.

You see the Orange Dog has some key structural problems when it comes to resting on his butt. He's like an inverted pyramid, there's a long torso with Arnold Schwarzenegger shoulders and chest,  balanced precariously on a small and quite pointy arse.  He really has to splay out his front legs to stay upright and even then it's touch and go.

So now I'm feeling really guilty (like the RSPCA might pull me over at any second) so I whip into Mackers drive-through for lunch (of sorts) for me and a treat for him. I'm not really hungry, but on doctors orders I've downed an anti-biotic for my Strep Throat, "..half an hour before food.." so I need to eat something.

I speak to the little box and say I'd like a fire-extinguisher, instead of a diet-coke, with my "meal" but he doesn't get the gag, so I ask for a chocolate thick shake instead. I need something slow moving and icy, like a liquid avalanche, to put out the burn in my throat.
I suppose a chilled beer would be out of the question.

I spend the next 15 traffic light stops dousing the fire and bouncing chicken McBites off the rear window into the back of the car.  This is an actual technique I'm using here. When I used to attempt strategic throws I would inevitably only get as far as the back seat and a large animal jumping over seat-backs in a moving vehicle makes for hazardous driving conditions.

Orange Dog keeps disappearing from view and bobbing back up licking his chops and looking very much cheered up by the accuracy of this process.

After one stop for 'the next birthday gift' (when can I start on Christmas shopping?) I let him out of the car into a nice park on the water near Manly, and we both let our anxieties blow away with the breeze across the long grass.

It's a nice day, probably because I emptied the washing line earlier, but I don't linger; I need more drugs, I need another Lemsip Multi-Relief. The thick shake's long gone and I need another hit.
Still a tad early for beer.

The anxiety rushes back when I think about the kind of tomorrow I'm expecting; most likely a big day. She-Who-Worships-Pink has the big dress rehearsal for her performance in the Glee Recital. Her Class is doing an all singing  all dancing review of 'Hey- Ho' from Snow White And The so-many-more-than Seven Dwarfs (at last count they had fifteen).

She'll miss half a day of school and I have to drive her, in hair and make-up (?) to somewhere (?) I have no clue how to get to.

We have Homer of course. Homer is our portable navigation thingy. It has not only Homer Simpson's voice, but it seems to have acquired his verbal opinions and reliability. Meaning; he won't always get you there by the quickest route (sometimes not at all) but you will arrive (if you do) laughing.

One of these days I'm gonna try Yoda's voice and see if The Force improves our chances.

After that I need to get her scrubbed off, back in uniform (school not dwarf) and back to school.

Then I'll have exactly two hours to; finish the novel, (yeah right), blog, do more laundry, make another batch of veggie lunchbox pancakes for the freezer, go back to the supermarket for the things I forgot today.

Tomorrow is also news item day, library day, canteen money day and swimming after school. If I don't forget something, or do something outrageously ditzy, it will be a miracle.

Oh and pray I'm home if and when the bathroom tile guys show up so we can have a working bathtub for the weekend.